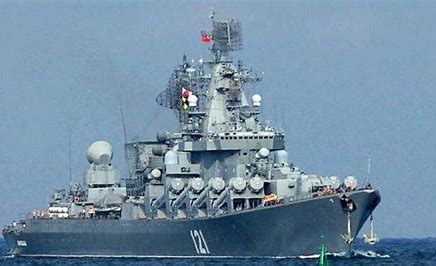 Intelligence shared by the US helped Ukraine sink the Russian cruiser Moskva, US officials told NBC News, confirming an American role in perhaps the most embarrassing blow to Vladimir Putin’s troubled invasion of Ukraine.

A guided missile cruiser carrying a crew of 510, the Moskva was the flagship of Russia’s Black Sea Fleet. It sank on April 14 after being struck by two Ukrainian Neptune anti-ship missiles, US officials said. Moscow said the vessel sank after a fire. The Moskva was the largest Russian warship sunk in combat since World War II. American officials said there were significant Russian casualties, but they don’t know how many.

The attack happened after Ukrainian forces asked the Americans about a ship sailing in the Black Sea south of Odesa, US officials told NBC News. The US identified it as the Moskva, officials said, and helped confirm its location, after which the Ukrainians targeted the ship.

The US did not know in advance that Ukraine was going to target the Moskva, officials said, and was not involved in the decision to strike. Maritime intelligence is shared with Ukraine to help it defend against attack from Russian ships, officials added.

The US role in the sinking has not been previously reported. But NBC News detailed last month how American intelligence shared with Ukraine had been instrumental in Ukraine’s successes to date, including in helping Ukraine target Russian forces and avoid Russian attacks.

American officials have expressed concerns that reporting about US intelligence sharing with Ukraine could anger Putin and provoke an unpredictable response.

The White House did not immediately provide a comment to NBC News. The revelation about the Moskva comes on the heels of reporting by The New York Times that intelligence shared by the US had in some cases helped Ukraine kill Russian generals. American officials did not dispute that, but pushed back strongly on the impression that the US was explicitly providing information with the intent of striking Russian military leaders.

“We do not provide intelligence on the location of senior military leaders on the battlefield,” Pentagon press secretary John Kirby told reporters on Thursday, adding that the US shares intelligence with Ukrainian forces but does not tell them who or what to attack.

The Moskva was considered Russia’s most lethal warship, rippling with cannons and missile systems, some of which were designed to defend it from attack. The credible account that it was hit and sunk by anti-ship missiles was widely seen as a deep humiliation for the Russian military.

In the early days of the war, the Moskva was part of what became an iconic incident, when officers on board ordered Ukrainian border guards on Ukraine’s Snake Island to surrender.

The sinking of the Moskva has reignited a longstanding debate among naval experts about just how vulnerable ships are to missiles and kamikaze drones.

In the aftermath, the Russian Navy pulled back from the Ukrainian coast, U defence officials told NBC News.