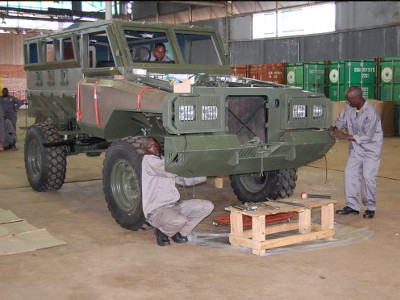 The establishment of an African defence industry mechanism or forum within the African Union has been proposed to develop African solutions to African problems, and promote peace and security on the continent as well as industrial development.

This is according to its proponent Dr Moses B. Khanyile, who currently serves as the Director of the Centre for Military Science (CEMIS), which is part of the Faculty of Military Science of the University of Stellenbosch.

Dr Khanyile detailed the proposal at the recent international virtual conference on Counter-Terrorism, Technology and Development in Africa co-hosted by the University of Óbuda, Hungary, and the Stellenbosch University.

Khanyile noted that Africa has a high number of violent conflicts, and has the highest concentration of peacekeepers – five out of 12 the current UN peacekeeping operations are hosted in Africa. This accounts for 85 per cent of UN peacekeeping troops worldwide.

The supply of peacekeeping equipment comes from outside the continent and maintenance, repair and overhaul (MRO) is hampered by a lack of infrastructure.

Collaboration among defence industry role-players on the continent, supported through the African Union structures, is imperative. Khanyile believes African solutions are needed to African problems, as opposed to externally imposed solutions. He believes more can be done at home without outside reliance and that if Africa does not do anything it might be left with antiquated and obsolete equipment being dumped on it.

“It is proposed an African Defence Industry Mechanism or Forum be established within the African Peace and Security Council.” Its mandate will be determined by the Council in line with regulations that make provision for the creation of technical committees pertaining to industry, science and technology. The council could provide harmonised procedures for collaboration across the continent.

This would see collaboration, join projects and skills transfer in the defence industry space. “Furthermore, it will also be responsible for the harmonisation of special projects and programmes, also determine the research and development priorities.”

In terms of the approach to establishing the mechanism or forum, Khanyile sees gradual progression, starting with acquiring skills to do maintenance, repair and overhaul on existing prime mission equipment. This would be followed by partnering with international original equipment manufacturers (OEMs) to produce certain defence and security items under license.

Then new Africa-designed items, suitable for African operational conditions, could be introduced, and African countries could trade in suitable equipment.

While Khanyile emphasised the benefits of setting up an African defence industry forum, especially for peacekeeping, economic development and self-sufficiency, he acknowledged challenges such as intra-Africa competition, governments not trusting each other, scramble for a limited market that could lead to competition, interference from foreign powers and the fact that not all countries have credible defence industry role-players (South Africa is one such credible defence role-players).

In conclusion, Khanyile said that global strategic developments provide an opportunity to enable Africa to collaborate on defence industry issues, and there are opportunities to engage with global powers doing business in Africa.

Establishment of an Africa Defence Industry Mechanism or Forum would allow the same procedures to be followed in establishing other subcommittees.

“This should be seen in the context of finding and developing African solutions to African problems. While recognising individual initiatives based on open market competition, there is a strong case for a structured continent-wide, state led defence industry collaboration,” he explained.