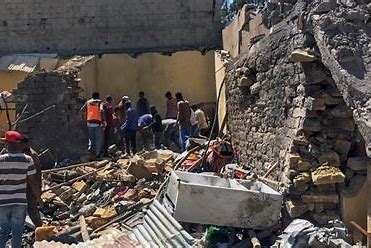 The attack brings the total number of casualties reported by medical personnel from a series of government bomb strikes since last week to at least 12 dead and 55 wounded.

The Ethiopian National Defence Forces issued a statement saying the latest attack was aimed at Mesfin Industrial Engineering, which it said was a military equipment maintenance facility operated by the rebel Tigray People’s Liberation Front (TPLF).

But witnesses in Mekelle told VOA that the late-morning airstrike hit a residential area. The victims were rushed to the city’s Ayder Referral Hospital where Tsega, a wounded resident, told VOA that a bomb had hit her house with her entire family inside.

“There were many people at home. Children slept. Half of our house has been damaged,” she said in Tigrinya. “We’ve survived. However, the house next to ours was demolished. I don’t think anybody could survive there.”

Gebremeskel Abraha, who was being treated for a knee wound, said he was walking on the street when the attack occurred.

The bomb “fell in between the houses while I was passing by,” he said. “The people you see here were hit by that bomb. Houses were ruined. Those who have been hit are peaceful people.”

Azeb Aregay, a neighbourhood resident, said it was not clear how many people were killed or injured.

“They are still searching,” she said. “Peaceful people are being hit. There are no fighters or armed people here. It is a residential area.”

Dr Kibrom Gebreselassie, the medical director at Ayder Referral Hospital, said six dead and 21 injured had been brought to the facility so far.

“Ambulances are coming in as we speak now. The number might go up,” he told VOA. He said three of the dead were children. We are treating people in makeshift tents as the hospital is full to capacity,” he told VOA’s Tigrigna Service.

He blamed a blockade of the region for shortages of food, drugs and medical equipment at the hospital.

“We survived until now on the drugs we had in the stock. As you see, the hospital is full and we are treating people in the tents we set up on the streets outside,” he said.

Ethiopian Communications Minister Legesse Tulu insisted that the attack hit a legitimate military target, telling VOA’s Habtamu Seyoum of VOA’s Amharic Service in a telephone interview that the strike “successfully targeted” a site that the government believed the TPLF used as an “arms maintenance facility.”

“The target was Slot 2,” he said. “Manufacturing Slot 2 is a place where they manufacture and repair military equipment. They repair there their heavy weaponry, and they use the heavy weaponry mainly to destroy towns, properties of farmers and infrastructure, et cetera. It was targeted to deter this, and it has been successfully targeted.”

Legesse said the federal government had not received any reports of civilian casualties from the strike and accused the TPLF of trying to deceive the international community and the media with false information.

“What we know is a successful raid was conducted that hit the military manufacturing that they use for military equipment maintenance facility,” he said.