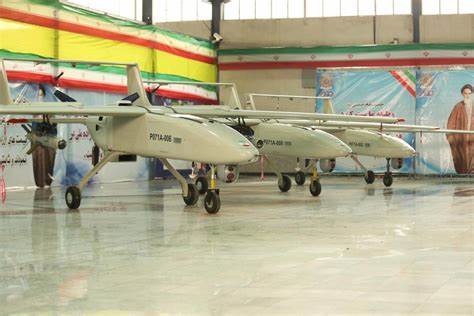 The Mohajer-6, yet to be proven in combat, is the latest design in the Mohajer-series. It was unveiled in 2017 and entered production a year later, serving with Iran’s Revolutionary Guards. It has an operational range of 200 kilometres and 40 kilogramme pay-load of two to four Ghaem-1, 5 or 9 precision-guided munitions. It has a 12-hour endurance with a maximum flight altitude of 5,500 metres. The nose of the lightweight UAV is fitted with an EOAS-I-18A forward-looking infrared (FLIR) turret.

Ethiopia’s unmanned aerial vehicle inventory previously consisted of Israeli systems (Aerostar UAS and WanderB mini-UAS) however their status is unclear and they cannot be armed.

Ethiopia has acquired relatively little military hardware over the last five years, according to the Stockholm International Peace Research Institute, with acquisitions since 2015 including four PHL-03 rocket launchers from China, a dozen Bastion armoured vehicles from France/United States; half a dozen G120TP trainers from Germany, 75 Thunder armoured personnel carriers from Israel, several Pantsyr-S1 air-defence systems from Russia and 143 modernised T-72 tanks from the Ukraine. In addition, the United States donated a single C-130 Hercules transport to Ethiopia.

The nine-month-old Tigray War between the Ethiopian government and the now Tigray Defence Force has displaced over two million people and killed an unestablished number of people, potentially thousands.

The United Nations Children’s Fund says over 100,000 children could suffer life-threatening malnutrition and over 400,000 people live in famine conditions in Tigray. The war has caused a refugee crisis as 50 000 people have fled into neighbouring Sudan.

Mass reports of gender-based violence and extrajudicial killings have taken place during the Tigray War with the Eritrean Defence Forces (EDF), in support of the Ethiopian government, attributed the main responsibility.

As the TDF attack from Mekelle in the north, the Oromo Liberation Army are attacking from the west, approaching the capital, Addis Ababa.

War crimes from both sides have been reported as the heavily armed conflict that began on November 4, 2020 ensued. Burned-out tanks, other military vehicles and scores of dead federal troops have largely been hidden from the world’s cameras.

The Ethiopian government is now urging citizens to join the armed forces as the conventional-turned guerrilla TDF pushes beyond its own region.