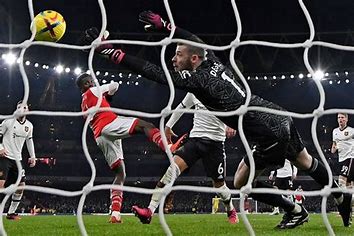 EPL biggest derby serves juice: Arsenal versus Manchester United is back – and back with a vengeance

To apply a slogan synonymous with the red side of Merseyside: this meant more. Or at least it felt that way. There was noticeably more crunch in the tackle, distinctly more crisp in the pass.

“What a game, it is a proper football match. This is retro Manchester United and Arsenal,” said Gary Neville in his role as co-commentator for Sky Sports.

He was right; this was Arsenal versus Manchester United as we love to remember it: full throttle, relentless, breathless. It was fitting that Sir Alex Ferguson and David Beckham were here to witness it all unfold.

Two veterans of this fixture when it was at its uncompromising peak; a war between two teams at the top of English and European football. They remember Martin Keown’s animalistic roar in Ruud van Nistlerooy’s face when the Dutchman missed from the spot in 2003.

They remember Roy Keane and Patrick Vieira’s bust-up in the Highbury tunnel two years later. They remember Sylvain Wiltord scoring at Old Trafford to win the league for Arsenal.

They remember Pizzagate. They remember that Ryan Giggs goal. That was a golden era of which may never be repeated; a fierce conflict between two teams that wholly despised each other.

It has become less captivating in recent years; this once unmissable showdown losing its mystique amid both clubs’ respective struggles to match the standards set by their illustrious predecessors. Arsenal have floundered in the post-Arsene Wenger era. Manchester United haven’t coped much better since Ferguson retired.

Regrettably, the malaise has transmitted onto the pitch; for years this once epic rivalry has failed to live up to the hype. When there’s nothing but pride – or a place in the top-four – on the line, that can often happen. Nothing triggers those competitive juices – or the ‘edge’ as the footballing fraternity describe it – when silverware is at stake.

Yet we’ve pined for those legendary clashes of the 2000s. On this evidence, we yearn no more. Arsenal versus Manchester United is back – and back with a vengeance. This was a domestic tussle that was enthralling and inspiring in equal measure. You couldn’t keep your eyes off it, just like it used to be.

United struck first, Arsenal responded. The Gunners edged ahead only for Lisandro Martinez to haul them back. It took the most marginal of offside calls, via VAR, to separate them. Like two punch drunk boxers refusing to throw in the towel. Arsenal versus Manchester United – just as it should be.

The memories came flooding back: no wonder Ferguson – sat next to United chief executive Richard Arnold – was beaming from ear-to-ear when the cameras panned towards him midway through the second half.

It is no coincidence that ahead of this game Arsenal were top of the Premier League, while United knew they could go within five points of the leaders with victory.

This once box office rivalry is rekindling, primarily because they have more than pride to lose. You hope this roller-coaster 90 minutes isn’t an isolated incident. English football needs this rivalry. Thankfully, the evidence indicates towards this becoming the norm, not the exception.

Mikel Arteta is building something special here at the Emirates Stadium; they looked every inch Premier League title winners on a tense evening. They are finding all the answers right now, much to Manchester City’s annoyance.

Similarly, United are heading in an upward trajectory under Erik Ten Hag – what this team may have lacked in attacking cohesion they amply made up for in resilience and will.

Arsenal and United are emerging as genuine forces again. It is good to have them back, particularly if they continue to serve up entertainment like this.

This was a football match that will live long in the memory; one bursting with guts and gusto. In the end, the glory belonged to Arsenal.