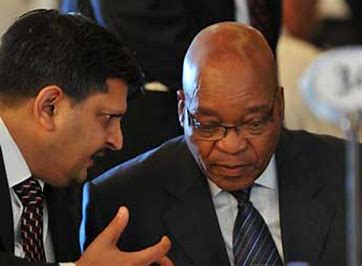 The arrest of Atul and Rajesh Gupta, who had lived for years in the sheikhdom, was the latest major extradition arrest by authorities in the United Arab Emirates. Dubai in particular has long welcomed the wealthy with little question into its luxury neighbourhoods.

With the UAE now heading the international policing body Interpol, the country has faced renewed questioning over its lax checks on money laundering and reluctance to extradite suspects. That has only increased as Russian money flows into the Arabian Peninsula nation amid Moscow’s war on Ukraine.

Police issued a statement saying they arrested the brothers “in connection with money laundering and criminal charges in South Africa.” The Emirates in a later statement said police arrested the two Guptas on June 2.

The two, as well as their brother Ajay, had been suspected of hiding out in Dubai since fleeing South Africa around the same time Zuma resigned in 2018 amid allegations he had overseen massive levels of corruption at state-owned companies.

The family has denied the allegations previously. It wasn’t immediately clear if the two had a local lawyer.

South Africa’s City Press newspaper reported in 2016 that the Gupta family had purchased a $30 million residence in Dubai’s Emirates Hills neighbourhood, which had 10 bedrooms, 13 bathrooms, nine reception rooms, a double grand staircase, a hand-painted dome, space for 11 cars, and chandeliers in virtually every room.

Dubai police said they made the arrest after receiving an Interpol “red notice” warrant for the two.

“The arrest reflects the continuous efforts of the UAE in combating money laundering crimes through local cooperation among the competent authorities,” police said.

Dubai police did not immediately acknowledge Ajay Gupta’s whereabouts. The Gupta family is originally from India. Authorities in South Africa late Monday said the two brothers had been arrested after discussions between them and Dubai officials. However, Emirati authorities did not confirm the arrests until Tuesday.

South Africa’s National Prosecuting Authority said on Tuesday that it had assigned “an experienced team of internal and external experts” who were working on the extradition of the two men to South Africa.

The arrests come nearly one year after the UAE ratified the extradition treaty with South Africa. It came into effect in June 2021, just as Interpol issued the red notice against the two Gupta brothers and their accomplices.

The Guptas are accused of using their association with Zuma to cash in on huge government contracts and kickbacks, and were believed to be so influential they had a say in Zuma’s appointment of Cabinet ministers. Their names burst into public view in 2016, when an official said the Guptas allegedly offered him a $44 million bribe to become the finance minister in exchange for favours.

The US Treasury Department placed the three Gupta brothers on a sanctions list in 2019, accusing them of being “members of a significant corruption network.” That forbids US entities from conducting business with them or handling their assets.

“Until they are in front of a South African court, we need to be cautious but what has happened to date should be applauded,” said Karam Singh, the executive director of the activist group Corruption Watch.

Zuma, 80, was president from 2009 until he was forced to step down by his African National Congress Party in 2018 amid the graft scandal. He faces corruption charges over a state arms purchase and went to prison in July 2021 for refusing a court order to testify before a judicial inquiry.

Zuma’s incarceration sparked weekslong riots in parts of South Africa that killed over 300 people and saw 25,000 soldiers deployed in the worst violence since the end of the apartheid era. Zuma has been out of prison on a medical parole that was later revoked, a decision now being challenged in the courts.

Dubai’s boom-and-bust real estate market, open to foreigners, has attracted investors and those fleeing conflicts from years. Just as long, war profiteers, terror financiers and drug traffickers sanctioned by the US have used Dubai’s real-estate market as a haven for their assets.

Scrutiny also has increased after the Financial Action Task Force, a global anti-money-laundering body, placed the UAE on its “grey list” earlier this year, escalating its monitoring of the country’s efforts to crack down on illicit financial flows.

Over the last year, Dubai police have announced several major extradition-related arrests, typically involving suspected drug dealers and gangsters. The extraditions now appear to have stepped up into other crimes. Last week, Dubai police similarly arrested a British man wanted in Denmark over an alleged $1.7 billion tax fraud case. Sanjay Shah, who maintains his innocence, similarly had been living in Dubai for years amid court cases targeting him over allegedly masterminding the scam.

However, there’s a renewed focus on Russian money flowing in as Moscow faces Western sanctions over the Ukraine war. In the northern emirate of Ras al-Khaimah, a sanctioned Russian oligarch’s megayacht now hides from possible Western seizure.

That vessel, the Motor Yacht A, is owned by Andrey Melnichenko, a European Union-sanctioned oligarch worth some $23.5 billion, according to Forbes. Melnichenko has rejected the sanctions and denied being close to Russian President Vladimir Putin.

In Nigeria’s disappearing forests where loggers outnumber trees, a million hectares were rendered barren in 20 years