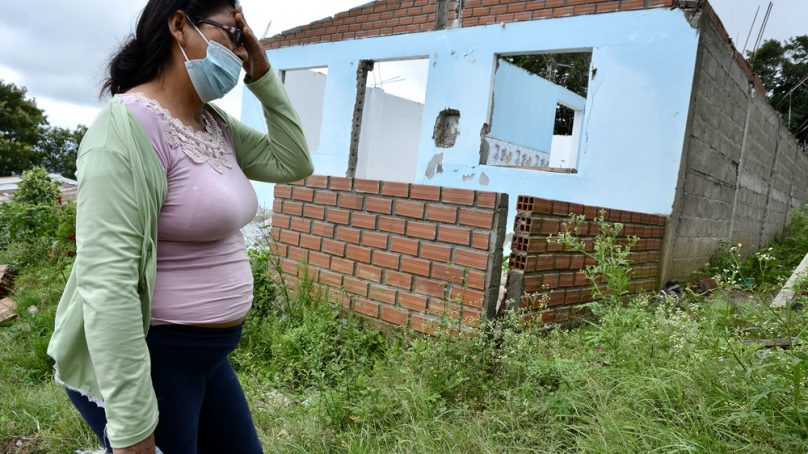 Four months on from the landslide, the devastation was still clear to see: long and wide fissures crisscrossed San Isidro’s few main roads, running both down and across the hillside, while the collapsed and dangerously cracked buildings remained eerily empty.

“I worked hard to have this and to raise my children well on my own,” María Nancy, who farms zebu cows for a living, said, standing in front of the skeleton of her former home. “At 3am, the house started filling with water, and I had to escape,” she recalled.

María Nancy refused to move herself or her 90-year-old mother into one of the tent clusters not far from their ruined home. She said the tents aren’t adapted for vulnerable populations, as they overheat in the tropical daytime and can’t be aired at night due to dengue-carrying mosquitoes. Worse still, they’re located in an area prone to landslides.

Instead, they joined her brother in the temporary shelter he built on the plot of land he bought after the disaster.

“People [in the rest of Peru] don’t know what is happening here,” said Samuel, a day labourer in El Salao, another community affected by the earthquake. Residents there lost their homes and farmland after the mighty Utcubamba river overflowed when the earthquake caused its defences to rupture.

“As humble people, who we are, we live in shame of our own conditions,” said Samuel. “Sometimes we’re afraid to go to the press to tell our stories. We have rights, but sometimes we are badly [informed about them].”

The string of disasters left thousands of survivors homeless. María Nancy, said tents provided by the authorities were unsuitable for vulnerable people, like her elderly mother, due to the searing tropical heat.

Frustrated by the slow pace of assistance, Samuel spent his savings on resettling into a newly built bamboo home a few hundred metres from the ruins of his old house – but in an area still next to the river and at risk from future flooding.

Allemant of Save the Children said heavier rainstorms due to climate change, coupled with deforestation, were leaving these communities at greater risk from landslides. “I have never seen people being displaced so many times,” she added.

In late April, Allemant tried to encourage residents in San Isidro to move away from their landslide-prone homes to safer areas being set up for temporary resettlement.

However, there was strong resistance from residents who preferred to stay closer to their old homes and plantations. Many questioned whether the government would follow through with the necessary support.

Allemant tried assuring them. “We are committed to continue helping you after you resettle, to help mediate your discussions with local authorities,” she told the families.

This all sounds good, but emergency responders only want to be operating in such settings for a limited period. It’s then up to the Peruvian state – and the survivors themselves – to chart the longer-term path forward.

“If not,” as Allemant explained it, “we are just reproducing a vicious cycle in humanitarian response.”

Felipe Pérez Detquizán, the regional director of Peru’s National Institute for Disaster Relief (Indesi), pushed back against criticism of the government’s operations in Amazonas, describing its response as “opportune, immediate, and adequate”.

Detquizán did acknowledge that resettlement to temporary homes had been slow, putting this down to difficulties in finding locations near enough to residents’ old homes that were also safe and affordable enough for the regional government. He added that Covid-19 had led to additional sanitation measures needing to be taken.

But this kind of explanation is unlikely to satisfy Jaime Quesquén, the director of San Isidro’s school – now housed in a temporary structure built by the residents themselves.

Quesquén was clearly annoyed by what he saw as insufficient support from the state. “We are fighting to get that assistance, and can say that it is because of us alone that our children are able to study here,” he said. “Right now, it is amazing to see that children in a republic like Peru require more of a presence by institutions that do not have anything to do with the state but which are ready to respond to our necessities.”

The same kind of aid and media neglect that is afflicting disaster survivors in Peru is happening the world over. Take the recent flooding in Nepal, where communities struggle for attention partly due to the scale of the deadly storms and landslides in neighbouring countries.

Floods overan villages, towns and cities throughout 2021’s monsoon season, taking the lives of 673 people while displacing 18,000. Unseasonal rains in October caused $50 million of damage as water swept away homes and roads, rice paddies, and bridges. And a single landslide in June 2021 blocked the Melamchi river and burst a dam in Bagmati province.

“Bangladesh has much more attention than say Nepal,” despite the countries being of similar geographical size, complained Azmat Ulla, head of Nepal’s delegation at the International Federation of Red Cross and Red Crescent Societies (IFRC). “Perhaps it’s to do with population density.”