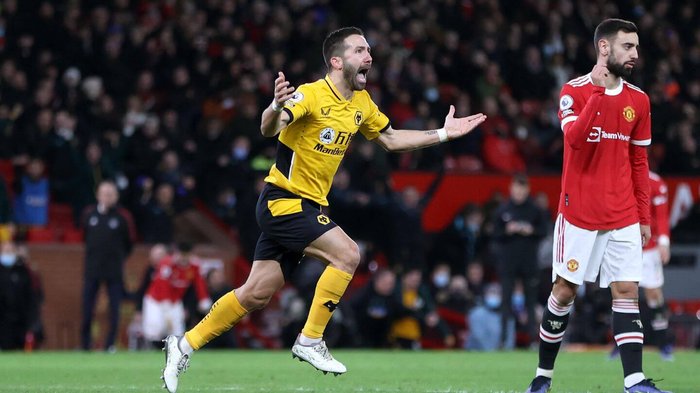 Devil in details: Man United stars ‘don’t want to be coached’ and Ralf Rangnick is ‘making up systems’

“You cannot coach players who don’t want to be coached… Manchester United were terrible.” That was former Premier League star Micky Gray’s verdict after Wolves outplayed the Red Devils to claim their first league victory at Old Trafford since 1980.

Joao Moutinho fired the Wanderers to a deserved 1-0 win as Ralf Rangnick’s unbeaten start to life as United’s interim manager came to a bitter end. After their promising victory over Burnley to finish 2021, United got the new year got off to a terrible start as their sloppy, disjointed display was punished by Bruno Lage’s impressive visitors.

And Gray, who played for Wolves, Leeds and Sheffield United in a top-flight career spanning two decades, couldn’t believe what he was seeing from Ralf Rangnick’s side following their awful showing at home.

“A well-deserved three points for Wolves,” he observed shortly after full-time. “The last 10 times they’ve been here they’ve not been able to win, but from the first minute until the last they dominated this game.

“They’ve had their problems in front of goal but they bided their time and on 81 minutes, Joao Moutinho picked up the ball and slotted it home from outside the area. They deserve the points but it’s big problems for Manchester United. Major, major problems.

“It was a disgraceful performance and as I’m speaking the Wolves players are going over to their supporters and it’s absolutely superb.

He added: “It was so lacklustre. You cannot coach players who don’t want to be coached. That’s how I see this bunch of Man United lads right now. They were terrible.”

Liverpool legend Jamie Redknapp echoed the sentiments of Gray in the Sky Sports studio, saying Rangnick’s tactics were confusing and insisted the German didn’t know what formation he wanted his team to play.

“They were playing a side so devoid of confidence, of ideas, of how to play.” he said. “The system – we talk about managers coming into the game and Rangnick came in with his famed 4-2-2-2 system.

“It doesn’t work if you don’t have the right players. You have to play the right system. Then he went to a three at the back, a 4-4-2, and at the end I think he was making up systems.

“There was no real identity of how they were trying to play. The Watford performance was a real low, but I’m sure the United fans thought at least they were good going forward. There was nothing today.”

He added: “When you watch Man City and the best teams, they have control of the midfield. United never had that. Never once did they play passes to each other, or have an ability to take the sting out of the game, they were so poor today.”

The second-half started more evenly and both sides had opportunities to take the lead. United thought they had the breakthrough when Cristiano Ronaldo headed the ball into the net from a free-kick but the offside flag went up immediately.

Wolves broke the deadlock eight minutes from time when the ball fell to Joao Moutinho on the edge of the box after Phil Jones headed out an Adama Traore cross and the Portuguese midfielder struck a low shot past David de Gea and into the bottom corner. Wolves go up to eighth in the league – just three points behind United, who remain seventh.