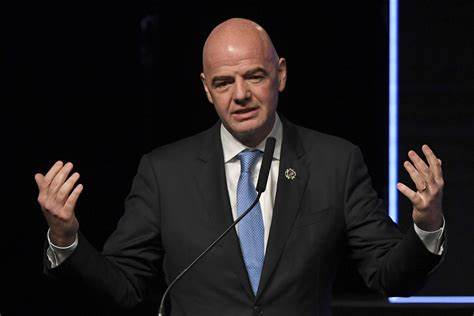 Despite religious encumbrances that sometimes prevent girls from taking the sport seriously, Mr Infantino acknowledged the efforts made in Morocco, a largely Muslim country, in getting women to participate in football.

The Fifa boss observation came on the back of discussions with Moroccan Minister for Foreign Affairs and International Cooperation Nasser Bourita and the President of Morocco Football Association Fouzi Lekjaa.

The Fifa president was speaking in the Moroccan capital, Rabat, following discussions that also looked into the country’s role in African football and the victory of the Atlas Lions at the last edition of CAF African Nations Championship earlier this month.

“It’s a pleasure to be here in this magnificent country where football is so strong,” Infanitino said after the first series of meetings with FMRF officials.

“I have already visited Morocco several times in the past and I noticed, not only the passion for football, but also the serious work of the federation. We are here to find out how we can benefit even more from this work. The MoulayAbdellah Sports Complex in Rabat and the infrastructure in the whole country can benefit the country, the whole of Africa and beyond. This is why we are here to see what else we can do through football infrastructure in Morocco to benefit men’s and women’s football, as well as youth football. We will leave here with lots of ideas for programmes about the future,” he explained.

Subsequent discussions followed with members of the Moroccan government, where the Fifa president congratulated Bourita on the success of the men’s national football team’s success in the CHAN tournament held in Cameroon.

He also highlighted both the country and the FMRF’s initiatives to get more girls and women involved in football and commended the recent launch of a four-year women’s football development plan. He termed the plan as a significant initiative to raise the profile of women’s football by actively engaging girls at grassroots level.

“My talks with Mr Bourita were both interesting and productive and I explained that Morocco is recognised as a leader in integrating more girls and women in football in Africa,” he pointed out.

“There are many positive moves, from appointment of female referee Bouchra Karboubi in the domestic league last October, to the introduction of the new women’s football development strategy by the FMRF last summer,” he added.

“There are great opportunities here and I look forward to seeing Morocco stake their claim for a place at the FIFA Women’s World Cup. I informed the Minister that Fifa will help the federation in further developing and nurturing the women’s game throughout Morocco, so even more girls and women can become involved in football.”