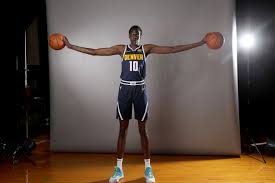 Bol Manute Bol, who will remain a rookie for the 2020-21 season as he did not appear in an NBA game prior to the hiatus on March 11, appeared in seven games for the Nuggets during the seeding games in the Orlando Bubble and averaged 5.7 points and 2.7 rebounds per game while shooting .500 from the field and .444 from beyond the arc.

The 21-year-old impressed in the Nuggets three scrimmage games prior to the Seeding Games in Orlando, posting averages of 13.7 points, 6.3 rebounds and 3.0 blocks in 29.3 minutes per game.

Bol, 7”2, 220, was selected with the 44th overall pick by the Miami Heat in the 2019 NBA draft and was acquired by the Nuggets in a draft night trade. He appeared in nine games as a freshman for Oregon in 2018-19, averaging 21.0 points, 9.6 rebounds and 2.7 blocks in 29.8 minutes before a season-ending foot injury. Bol reached double figure scoring in every game and tallied four double-doubles.

The 19-year-old was born in Khartoum, Sudan, and is the son of former NBA great Manute Bol who played 10 seasons for the Washington Bullets, Golden State Warriors, Philadelphia 76ers and Miami Heat.

Manute Bol was born in the present South Sudan and upon retiring from the game, he was behind the formation of South Sudan Basketball Association.

Thanks to the influence of Manute Bol and his mentor Luol Deng, basketball is a very popular sport in South Sudan. The duo is behind the construction of one of the best basketball stadiums in the capital Juba despite years of civil strife and natural disasters.