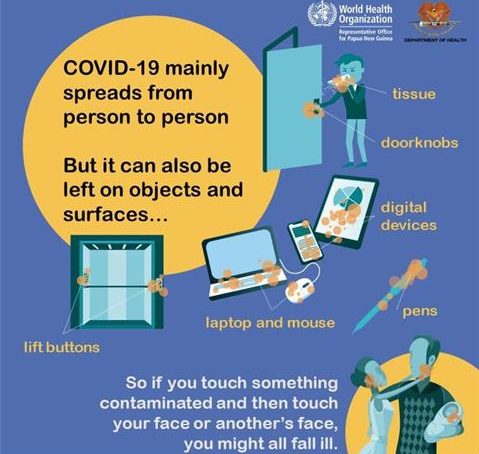 When Emanuel Goldman went to his local New Jersey supermarket last March, he didn’t take any chances. Reports of Covid-19 cases were popping up across the United States, so he donned gloves to avoid contaminated surfaces and wore a mask to prevent him inhaling tiny virus-laden droplets from fellow shoppers.

Neither gloves nor masks were recommended at the time.

Then, at the end of March, a laboratory study showed that the coronavirus SARS-CoV-2 can persist on plastic and stainless steel for days. That triggered startling headlines and a slew of advice on how to decontaminate everything from doorknobs to groceries.

It also seemed to confirm guidance issued by the World Health Organisation (WHO) in February that the virus that causes Coovid-19 can spread through contaminated surfaces, known as fomites.

By May, the WHO and health agencies around the world were recommending that people in ordinary community settings – houses, buses, churches, schools and shops – should clean and disinfect surfaces, especially those that are frequently touched. Disinfectant factories worked around the clock to keep up with heavy demand.

But Goldman, a microbiologist at Rutgers New Jersey Medical School in Newark, decided to take a closer look at the evidence around fomites. What he found was that there was little to support the idea that SARS-CoV-2 passes from one person to another through contaminated surfaces. He wrote a pointed commentary for The Lancet Infectious Diseases in July, arguing that surfaces presented relatively little risk of transmitting the virus. His conviction has only strengthened since then, and Goldman has long since abandoned the gloves.

Many others reached similar conclusions. In fact, the US Centres for Disease Control and Prevention (CDC) clarified its guidance about surface transmission in May, stating that this route is “not thought to be the main way the virus spreads”. It now states that transmission through surfaces is “not thought to be a common way that COVID-19 spreads”.

As evidence has accumulated over the course of the pandemic, scientific understanding about the virus has changed. Studies and investigations of outbreaks all point to the majority of transmissions occurring as a result of infected people spewing out large droplets and small particles called aerosols when they cough, talk or breathe. These can be directly inhaled by people close by. Surface transmission, although possible, is not thought to be a significant risk.

But it’s easier to clean surfaces than improve ventilation – especially in the winter – and consumers have come to expect disinfection protocols. That means that governments, companies and individuals continue to invest vast amounts of time and money in deep-cleaning efforts.

By the end of 2020, global sales of surface disinfectant totalled $4.5 billion, a jump of more than 30 per cent over the previous year. The New York Metropolitan Transit Authority (MTA), which oversees subways and buses and lost billions of dollars in passenger revenue in 2020, spent $484 million last year in its response to Covid-19, including enhanced cleaning and sanitisation, according to a spokesperson.

Part of the problem is that specialists can’t rule out the possibility of fomite transmission, and the guidance from many health agencies about how to deal with surfaces has been unclear as the science has changed.

In November, Chinese authorities introduced guidelines requiring disinfection of imported frozen-food packages. And the CDC directs people to a comprehensive list of agents that kill SARS-C0V-2 and says: “Frequent disinfection of surfaces and objects touched by multiple people is important.”

Experts say that it makes sense to recommend hand washing, but some researchers are pushing back against the focus on surfaces. In December, engineer Linsey Marr at Virginia Tech in Blacksburg co-wrote an opinion article for The Washington Post imploring people to ease up on cleaning efforts.

“It’s become clear that transmission by inhalation of aerosols – the microscopic droplets – is an important if not dominant mode of transmission,” says Marr, who studies airborne disease transmission. Excessive attention on making surfaces pristine takes up limited time and resources that would be better spent on ventilation or the decontamination of the air that people breathe, she says.

The focus on fomites – rather than aerosols – emerged at the very beginning of the coronavirus outbreak because of what people knew about other infectious diseases. In hospitals, pathogens such as methicillin-resistant ataphylococcus aureus, respiratory syncytial virus and norovirus can cling to bed rails or hitch a ride from one person to the next on a doctor’s stethoscope.

So as soon as people started falling ill from the coronavirus, researchers began swabbing hospital rooms and quarantine facilities for places the virus could be lurking. And it seemed to be everywhere.

In medical facilities, personal items such as reading glasses and water bottles tested positive for traces of viral RNA – the main way that researchers identify viral contamination. So, too, did bed rails and air vents. In quarantined households, wash basins and showers harboured the RNA, and in restaurants, wooden chopsticks were found to be contaminated.

And early studies suggested that contamination could linger for weeks. Seventeen days after the Diamond Princess cruise ship was vacated, scientists found viral RNA on surfaces in cabins of the 712 passengers and crew members who tested positive for Covid-19.

But contamination with viral RNA is not necessarily cause for alarm, says Goldman. “The viral RNA is the equivalent of the corpse of the virus,” he says. “It’s not infectious.”

To address that part of the equation, researchers began testing whether coronavirus samples left for days on various surfaces could infect lab-grown cells. One study in April found that the virus remained infectious on hard surfaces such as plastic and stainless steel for six days; on bank notes, it lasted for three days; and on surgical masks, at least seven days.

A later study announced that viable virus was present on skin for up to four days, but on clothes it survived for less than eight hours. And others found infectious virus on library books bound in natural and synthetic leather after eight days.

Although these types of experiment demonstrate that the coronavirus can survive on surfaces, this doesn’t mean that people are catching it from surfaces such as doorknobs. Goldman and others caution against reading too much into virus-survival studies, because most don’t test conditions that exist outside the lab.

“They were experiments that started out with humongous amounts of virus, nothing that you would encounter in the real world,” he says. Other tests have used mock saliva and controlled conditions such as humidity and temperature, all of which widen the gulf between experimental and real-world conditions, says Goldman.

Only a handful of studies have looked for viable virus outside the lab. Tal Brosh-Nissimov, who heads the infectious-diseases unit at the Assuta Ashdod University Hospital in Israel, and his colleagues swabbed personal items and furniture in hospital isolation units and rooms at a quarantine hotel. Half of the samples from two hospitals and more than one-third of samples from the quarantine hotel were positive for viral RNA. But none of the viral material was actually able to infect cells, the researchers reported.

Indeed, researchers have struggled to isolate viable virus from any environmental samples, not just fomites. In the only study that has succeeded, researchers grew virus particles from hospital air samples collected at least two metres from a person with Covid-19.

Nevertheless, scientists warn against drawing absolute conclusions. “Just because viability can’t be shown, it doesn’t mean that there wasn’t contagious virus there at some point,” says epidemiologist Ben Cowling at the University of Hong Kong.