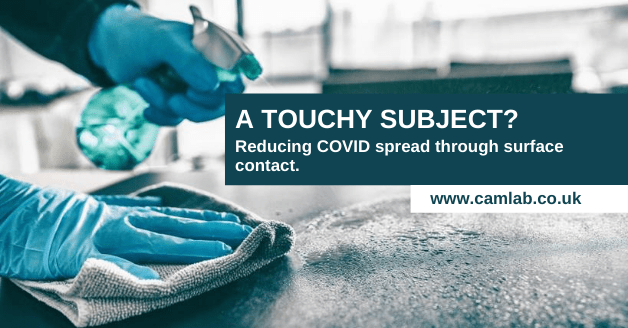 In 1987, researchers at the University of Wisconsin – Madison put healthy volunteers in a room to play cards with people infected with a common-cold rhinovirus. When the healthy volunteers had their arms restrained to stop them touching their faces and prevent them transferring the virus from contaminated surfaces, half became infected.

A similar number of volunteers who were unrestrained also became infected. In a separate experiment, cards and poker chips that had been handled and coughed on by sick volunteers were taken to a separate room, where healthy volunteers were instructed to play poker while rubbing their eyes and noses.

The only possible mode of transmission was through the contaminated cards and chips; none became infected. The combination of experiments provided strong evidence that rhinoviruses spread through the air. But such studies are considered unethical for SARS-CoV-2, because it can kill.

Although it’s probably rare, says Ben Cowling, an epidemiologist at the University of Hong Kong, transmission through surfaces can’t be ruled out. “It just doesn’t seem to happen that much, as far as we can tell.”

Estimates of transmission based on levels of viral RNA persisting in the environment seem to bear this out. From April to June, environmental engineer Amy Pickering then at Tufts University in Medford, Massachusetts, and her colleagues took weekly swabs of indoor and outdoor surfaces around a town in Massachusetts.

On the basis of the levels of RNA contamination and how often people touched surfaces such as doorknobs and buttons at pedestrian crossings, the team estimated that the risk of infection from touching a contaminated surface is less than five in 10,000 – lower than estimates for SARS-CoV-2 infection through aerosols and lower than surface-transmission risk for influenza or norovirus.

“Fomite transmission is possible, but it just seems to be rare,” says Pickering, who is now at the University of California, Berkeley. “A lot of things have to fall into place for that transmission to happen.”

That might explain why a global comparison of government interventions to control the pandemic in its early months found that cleaning and disinfection of shared surfaces ranked one of the least effective at reducing transmission. Social distancing and travel restrictions, including lockdowns, worked the best.

That leaves researchers sorting through messy epidemiological data about how the virus spreads. Hundreds of studies of Covid-19 transmission have been published since the pandemic began, yet there is thought to be only one that reports transmission through a contaminated surface, by what it termed the snot-oral route.

According to the report, a person with Covid-19 in China blew his nose with his hand and then pressed a button in his apartment building elevator. A second resident in the building then touched the same button and flossed with a toothpick immediately after, thereby transferring the virus from button to mouth. But without genome sequences of the viruses infecting each person, transmission through another unknown person couldn’t be ruled out.

In one other case, eight people in China are thought to have been infected after stepping in sewage containing the virus on the street and then walking the contamination into their homes.

Despite the rarity of published examples of fomite transmission, Chinese authorities require that imported frozen food be disinfected. The change in guidelines followed a report, which has not been released in detail, that a worker at a frozen-food business in the northern port city of Tianjin became infected after handling contaminated packaging of frozen pork imported from Germany.

But the WHO and other experts have disputed claims that people can be infected through the food chain in this manner.

Cowling says that more detailed investigations are needed, carefully tracking who infects whom, and what surfaces and spaces they shared around the time of infection. “What we really, really value is epidemiological investigations of transmission patterns, whether it’s in households or workplaces or elsewhere,” he says. “I don’t think we’ve been doing enough of that.”

Armed with a year’s worth of data about coronavirus cases, researchers say one fact is clear. It’s people, not surfaces, that should be the main cause for concern. Evidence from superspreading events, where numerous people are infected at once, usually in a crowded indoor space, clearly point to airborne transmission, says Linsey Marr, an engineer at Virginia Tech in Blacksburg.

“You have to make up some really convoluted scenarios in order to explain superspreading events with contaminated surfaces,” Marr says.

Hand-washing is crucial, she says, because surface transmission can’t be ruled out. But it’s more important to improve ventilation systems or to install air purifiers than to sterilize surfaces, she says. “If we’ve already paid attention to the air and we have some extra time and resources, then yes, wiping down those high-touch surfaces could be helpful,” she explains.

Households can also ease up, says Pickering. Quarantining groceries or disinfecting every surface is going too far. “That’s a lot of work and it also is probably not reducing your exposure that much,” she says. Instead, reasonable hand hygiene, as well as wearing a mask and social distancing to reduce exposure from close contacts is a better place to focus efforts.

The WHO updated its guidance on October 20, saying that the virus can spread “after infected people sneeze, cough on, or touch surfaces, or objects, such as tables, doorknobs and handrails”.

A WHO spokesperson told Nature that “there is limited evidence of transmission through fomites.

Nonetheless, fomite transmission is considered a possible mode of transmission, given consistent finding of environmental contamination, with positive identification of SARS-CoV-2 RNA in the vicinity of people infected with SARS-CoV-2.”

The WHO adds that “disinfection practices are important to reduce the potential for Covid-19 virus contamination”.

The CDC did not respond to queries about inconsistencies in its statements about the risks posed by fomites.

The conundrum facing health authorities, says Marr, is that definitively ruling out surface transmission is hard. Authorities can be reluctant to tell people not to be cautious. “You never want to say, ‘Oh, don’t do that,’ because it can happen. And you know, we should follow the precautionary principle,” she says.

Despite the evolving evidence, the public might have grown to expect extra levels of sanitisation after the early months of the pandemic. When the New York MTA surveyed passengers in late September and early October, three-quarters said that cleaning and disinfecting made them feel safe when using transport.

Goldman continues to wear a cloth mask when he leaves home, but when it comes to the possibility of catching the coronavirus from a contaminated surface, he doesn’t take any special precautions. “One of the ways we protect ourselves is by washing our hands,” he says, “and that applies pandemic or no pandemic.”