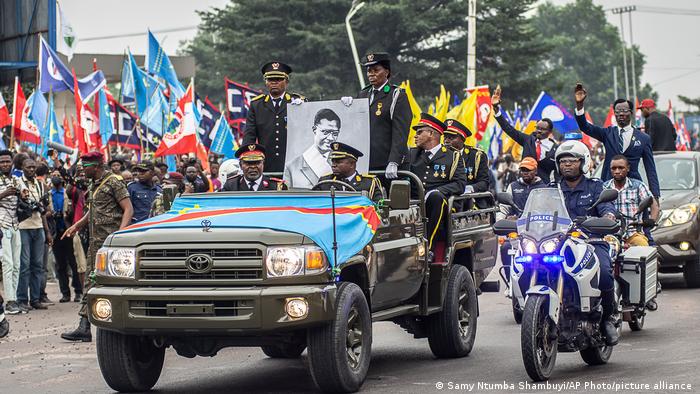 The remains of Congolese independence hero and first Prime Minister Patrice Lumumba were laid to rest in Kinshasa on Thursday, the country’s Independence Day, 62 years after his assassination by Belgian-backed rebels.

The ceremony was made possible after a gold-capped tooth, all that remained of the body, was returned to Congo by former colonial ruler Belgium earlier this month.

Hundreds of people gathered alongside Lumumba’s descendants to bid a final farewell to one of the most important figures in the decolonization of Africa.

A banner with the words “Many thanks, National Hero” was suspended over the crowd, which included the president of the neighbouring Republic of Congo, Denis Sassou Nguesso, Belgium’s foreign minister and several African ambassadors.

In 1958, at the age of 33, Lumumba helped found the Congolese National Movement (MNC). As its leader two years later, he helped negotiate an end to Belgian colonial rule. A supporter of pan-Africanism who sought to form a government representing all regional ethnic groups, Lumumba soon found himself contending with the Katangan secessionists who were backed by Belgian forces.

He asked the US for help but was rebuffed due to his perceived communist sympathies, after which he turned to the Soviet Union. He was ousted in a coup in 1961 and killed by the Katangans. The Belgian police commissioner who oversaw the destruction of his body kept the tooth. It was seized from the man’s daughter by Belgian authorities in 2016.

For many in Congo, Lumumba is a symbol of the positive developments the country could have achieved after its independence. Instead, it became mired in decades of dictatorship that drained its vast mineral riches.

Lumumba’s death paved the way for the rise of Mobutu Sese Seko, who ruled the country, which he later renamed Zaire, for decades. He died in exile in 1997.

In 2002, Belgium apologised for its role in Lumumba’s death. This month, Belgian King Philippe expressed regret for his nation’s abuses in Congo when it was a Belgian colony.