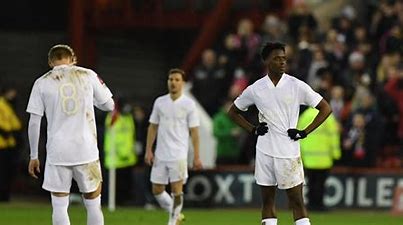 Arsenal boss Mikel Arteta has been criticised for fielding a weakened team against Nottingham Forest after his side were knocked out of the FA Cup with a 1-0 defeat to the Championship side.

Substitute Lewis Grabban’s late winner gave the hosts a deserved third-round win against the slapdash Gunners, who exited the competition at this stage for just the second time in 25 years.

The 14-time winners didn’t even manage a shot on target at the City Ground. And TalkSport’s Alex Crook was left bewildered as to why Arteta decided to field some fringe players when the competition is realistically one of two chances that the club can claim silverware this season.

“Arsenal are not good enough in their current guise to take liberties against Nottingham Forest in the FA Cup,” Crook told the Boot Room.

“We can say the same about Tottenham earlier when they had to bring the cavalry in, Harry Kane and Lucas Moura, to see of Morecambe.

“You look at Arsenal’s bench today. [Alexandre] Lacazette didn’t start because [Eddie] Nketiah got another opportunity as the lone man up front.

“[Kieran] Tierney on the bench, he’d have definitely started if it was a Premier League game.

“No Aaron Ramsdale, he was on the bench.

“The fringe players aren’t good enough to swat aside Championship opposite.

He added: “It will be the same for Man United tomorrow.

“Arsenal are not Liverpool, Man City or even Chelsea. The squad’s not good enough to go to Forest and expect to get into the fourth round.

“I think it’s a massive opportunity to missed for Mikel Arteta, because what are you resting players for? To lose a league cup semi-final?

“I can’t fathom the team selection.”

Arteta questioned Arsenal’s desire after the Gunners crashed out of the competition they’ve had so much success in in the past.

“We needed more drive, more hunger to win at any cost in every single action, much more. We were not at our level,” he said.

“I’m really disappointed with the performance, first of all. Not with the attitude but how much purpose we have and what determination we showed to change the game when it’s difficult to play against and the way they play.

“I have played in games like that for the last 18 years and I know how complicated it is to come here and it’s no surprise the difficulties you are going to face. But when we do that, we have to face it in a different way.

“It is really hurting. It is a competition that is very related to our history and to get out of it is a big bump.”