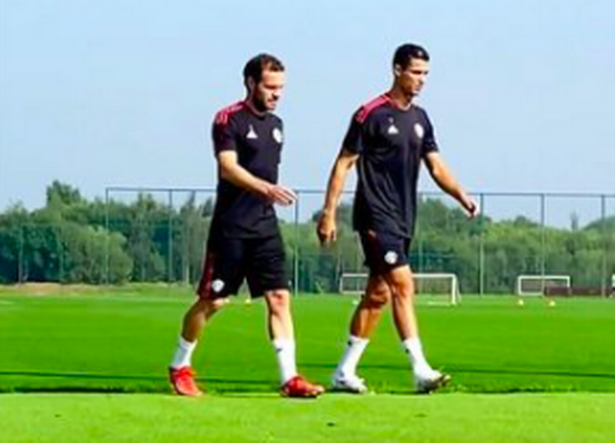 Cristiano Ronaldo is gearing up for his return to the Manchester United team. The 36-year-old icon reported for training at the club’s Carrington ground ahead of his potential second debut for the club on Saturday.

Ronaldo was released from international duty early after breaking the world record for most international goals when he fired in his 110th and 111th for Portugal. But now it is back to club action and a return to the team where he made his name more than a decade ago.

He was welcomed by his new teammates and fans noticed fellow Portuguese Diogo Dalot was particularly pleased to see him, suggesting he was like every Man United fan.

The forward was re-signed by the Red Devils from Juventus on a two-year deal. He has also become the highest paid player in the Premier League on a reported £480,000 ($660,000)-a-week.

Ronaldo won three Premier League titles, two League Cups, the FA Cup and Champions League in his first six-year spell at Old Trafford. The club will be hoping he can emulate that success and deliver a first league title since 2013.

The five-time Ballon d’Or winner could make his second debut for the club this weekend at Old Trafford. Manchester United face Newcastle on Saturday at 3pm, but that game will not be shown on live TV due to the broadcaster blackout.

Instead, you can listen to updates as talkSPORT’s GameDay Live coverage comes from St James’ Park. Ronaldo will also don his famous No.7 shirt again at the club with Edinson Cavani kindly shifting to No.21 following the sale of Daniel James to Leeds.

Fans are loving his return and have been shelling out on merchandise ahead of the return. According to Man United’s official retail partner ‘Fanatics’ shirt sales hit record figures and in the first hour alone they bettered the best full day of global sales for the club’s online store.

And according to their figures Ronaldo is now the biggest-selling player in the 24 hours following a transfer to a new club.

He sits ahead of Lionel Messi (to PSG), Tom Brady (to Tampa Bay Buccaneers) and LeBron James (to LA Lakers).