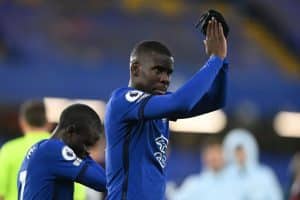 Chelsea have agreed a £25.6 million ($35 million) deal to sell Kurt Zouma to West Ham, according to reports in France. The deal is expected to be finalised in the coming hours.

The Champions League holders have been looking to sign Jules Kounde from Sevilla but need to offload Zouma first. Transfer expert Fabrizio Romano says Zouma’s move to the Hammers creates room for the acquisition of Kounde to be fast-tracked.

“Chelsea are prepared to submit an official bid for Jules Koundé in the next hours. Chelsea will proceed once Zouma-West Ham deal will be completed [subject to settlement of €30 million fee, still final details to be sorted on personal terms]. Personal terms agreed between Koundé-Chelsea,” Romano posted on his Twitter handle.

The 26-year-old’s preference has been to remain in the Premier League with both Tottenham and West Ham showing interest. However, the Hammers have now finalised the deal for Zouma after a breakthrough in talks with the Blues.

According to RMC Sport and Telefoot, a fee has been agreed between the two clubs while personal terms are close to being finalised with Zouma signing a five-year contract with West Ham.

The Hammers had initially refused to meet Zouma’s £120,000 ($165,000)-a-week wage demand but the club are now confident of reaching an agreement with the Chelsea centre-back.

Once Zouma is sold, Chelsea are expected to press ahead with the signing of Kounde, who has a £68 million ($93 million) release clause in his contract with Sevilla.

Kounde has played in both of Sevilla’s La Liga games so far this season, helping the club record two clean sheets against Rayo Vallecano and Getafe.