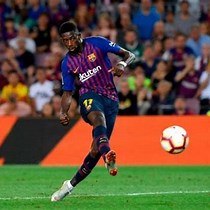 Chelsea in pole position to sign Barcelona winger Ousmane Dembele as PSG, other suitors cool interest in the France international

Paris Saint-Germain have pulled out of the race for Ousmane Dembele, leaving Chelsea as the only club who could take him away from Barcelona, TalkSport reports.

The online publication says Dembele is due to become a free agent at the end of the month unless Barcelona can renew his contract.

“That seems unlikely after they tried to sell him in January. But after that rift, the winger restored his role of prominence at Camp Nou,” it says.

According to the Daily Mail, “Chelsea have received a massive boost in their pursuit of Ousmane Dembele, who could reportedly join as soon as next week. Barcelona’s hopes of starting a bidding war for the winger are dead as new PSG sporting director Luis Campos is said to have vetoed a move for the French international. And Barca are also said to be pessimistic of convincing the ex-Dortmund man to sign a new deal.”

It says, “Antonio Conte is said to be ready to make a surprise bid to lure Romelu Lukaku across London to Spurs. And Chelsea are still keen on signing Jules Kounde, who [new club owner] Todd Boehly is reported to have told [the manager] to ignore all other offers while the Blues secure the funds.”

During the 2021-22 season as a whole, Dembele provided 13 assists and one goal from 21 La Liga appearances. Now, Barcelona would not be against having him add to them. But there have been difficulties finding a middle ground so far. It has led other clubs to be linked with the 2018 World Cup winner.

One of the main suitors are Chelsea. Thomas Tuchel previously coached Dembele during his Borussia Dortmund days. In that spell with the German tactician, there were 10 goals and 21 assists from 49 appearances.

It could therefore be interesting for Dembele and Tuchel to reunite at Chelsea. However, there have been links with other clubs. Now, though, Diario Sport are indicating that Chelsea are the last suitor standing with a rival offer to that which Barcelona have been working on.

According to the report, another contender for Dembele’s signature, PSG, are no longer interested. Their previous sporting director Leonardo supported his arrival, but the incoming Luis Campos does not. Instead, the French champions are more likely to invest in their midfield, especially now they are keeping Dembele’s compatriot Kylian Mbappe up front.

In turn, only Chelsea are in the running, so it seems, if Dembele leaves Barcelona. There remains a chance he could stay in La Liga, but to do so he will have to submit to his club’s decreased offer. Barca are apparently “very pessimistic” over the likelihood of him staying.

Chelsea, for their part, would also not be meeting Dembele’s “stratospheric” demands. However, they are willing to offer him a four-year contract with a significant signing bonus. His agent is keen on the Chelsea solution and is trying to work on its progress.

At Stamford Bridge, there is an evolution being planned in the final third. Strikers like Timo Werner and Romelu Lukaku have struggled to live up to their price tags. In Dembele’s position on the wing, the likes of Christian Pulisic and Hakim Ziyech could face an uncertain future. More competition for places could help or hinder them.

But if Tuchel can get the best out of Dembele again, it would be a boost to Chelsea as a whole. At the age of 25, he should be ready to put injury issues behind him and kick on to reach his peak levels. Chelsea would be grateful if he could do so with them.