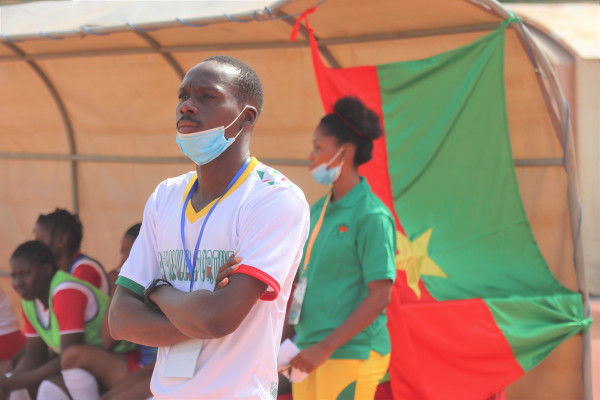 The Indomitable Lionesses of Cameroon whitewashed hosts Burkina Faso on June 9, 2021, to mark an emphatic return to international action in a match played at the August 4 Stadium.

Visiting Cameroon scored 37 to the good in a match that took place on the side-lines of Rugby Africa Cup repechage in Ouagadougou, Burkina Faso.

The match, initially set to kick off at 8am local time, was delayed for about an hour by a heavy down-pour that soaked the pitch and rendered it unplayable.

When it finally got underway the Cameroonian side demonstrated grit, endurance and mastery of the oval ball and pinned their opponents in their own half for long periods in the first half.

Prisco Rosine N’Dingo opened the scoring in the second minute and quickly followed it up with two unconverted tries as the Indomitable Lionesses took a commanding 15-0 halftime lead.

However, in the 26th minute, Prisco Rosine N’Dingo turned villain when she was binned for a dangerous tackle on an opponent.

After the 10-minute interval, Cameroon scored four more tries and converted one, which earned them 22 points in the second half for a haul of 37 at the end of the match. Burkina Faso failed to match the pace and energy of the Cameroonians throughout the test match.

Cameroonian coach Jacques NGomsu Tchon Lahui said they would have scored more tries but the hosts were strong and played well despite not scoring a single try. For captain Gertrude Prombove, the opponents gave them a tough outing on the field.

This is the first match since Cameroon returned to African and international rugby after almost a decade in the wilderness.

The women’s competition is part of Rugby Africa’s plan to develop 15-team competition between 2021 and 2025.