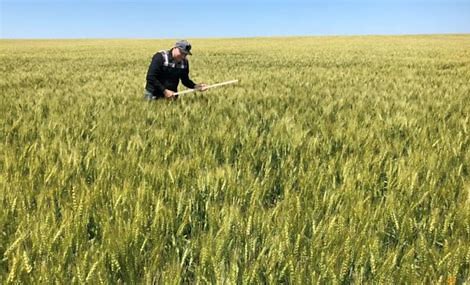 Six boxes of wheat seed sit in our cold store. This is the first time in a decade that my team has not been able to send to Ukraine the improved germplasm we’ve developed as part of the Global Wheat Programme at the International Maize and Wheat Improvement Centre in Texcoco, Mexico.

International postal and courier services are suspended. The seed had boosted productivity year on year in the country, which is now being devastated by war.

Our work builds on the legacy of Norman Borlaug, who catalysed the Green Revolution and staved off famine in South Asia in the 1970s. Thanks to him, I see how a grain of wheat can affect the world.

Among the horrifying humanitarian consequences of Russia’s invasion of Ukraine are deeply troubling short, medium and long-term disruptions to the global food supply. Ukraine and Russia contribute nearly one-third of all wheat exports (as well as almost one-third of the world’s barley and one-fifth of its corn, providing an estimated 11 per cent of the world’s calories). Lebanon, for instance, gets 80% of its wheat from Ukraine alone.

Already, wheat prices have soared to record highs. The fate of the approximately six million hectares of wheat planted in Ukraine remains uncertain. Will it get the management and inputs required to ensure a productive harvest? Will the summer crop reach markets, both domestic and export?

This scenario will probably only worsen with rising input costs, as supply-chain disruptions, not least of fertiliser and fuel, reduce productivity in growing regions inside the war zone and beyond. There could not have been a worse time for heavy rains to have dented China’s winter wheat crop.

Wealthy nations, and their food value chains and consumers, will absorb price increases much more easily than will poorer countries. In low-income nations, the ability of governments to continue to subsidise bread will be strained; the knock-on effects on overall government spending and provision of public services will reach far beyond wheat.

An unprecedented level of international political and economic action is now required to safeguard the immediate food supply of those who are already vulnerable, including in the global south. At the same time, a range of agricultural interventions must be deployed to make the supply of wheat more resilient in the years ahead.

This problem goes much wider and deeper than crops neglected in shelled fields. The war highlights the folly of having 2.5 billion people depend so heavily on three main regions of wheat production and export in a changing climate. Three steps must be taken to avert crisis, now and in the future.

First, the world needs to spread its bets. How? By expanding wheat production in high-productivity areas (North America and Europe) and in regions with suitable conditions (Sudan and Nigeria are promising), and by increasing productivity in places where it is low (such as Ethiopia and Turkey).

All this will require secure supplies of skilled workers, fertiliser and seed, particularly to low-income nations. Improved wheat germplasm provides predictable, reliable and resilient plants – but only if farmers have access to best growing practices. There is also untapped potential to create new flour blends – for example using cassava, legumes and millets. This has been explored for bettering nutrition, and must now be scaled for market by improving price, sourcing and logistics.

Second, real-time monitoring and feedback systems need to be used and scaled to safeguard production and protect the most vulnerable crops. Advances in satellite and remote-sensing imagery and data capture make it possible to chart progress in real time to, for instance, inform application of fertilizer to optimise wheat yields.

Genomics should be used to track plant pathogens and pests that travel beyond borders through seed and that can wreak havoc on wheat productivity. This happened with wheat blast, the devastating fungus that spread from South America to Bangladesh in 2016, halving average yields in affected areas. In 2018, the disease was reported in Zambia, presenting a significant threat to African wheat production. It had probably moved alongside the seed trade.

Third, developments in agricultural science and policy need to target support to women who farm in rural areas. A decade ago, the Food and Agriculture Organization estimated that if women had the same access to resources (land, technology, credit, education and so on) as men did, they could increase yields by 20-30 per cent, reducing the number of hungry people in the world by 12 per cent, perhaps more.

But as crops gain economic and social value, they become goods for trade rather than for household consumption, and men often take more control. So, in the absence of tailored policies, price increases and intensification could widen, rather than shrink, gender gaps.

Throughout history, conflict has been driven by inequitable and insufficient access to food. Without urgent interventions, from research to policy to finance, the looming food crisis will have significant impacts on the livelihoods of poor people — even in high- and middle-income nations — and on global stability and on equity.

Hate speech: Weaponisation of social media in Ukraine war should push UN into creating a body to fight the crime