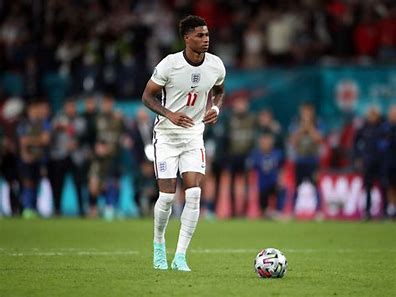 Marcus Rashford has said that he has “felt no prouder moment” representing England at Euro 2020 and that he “will never apologise for who I am and where I came from” after he was subjected to racist abuse following the Three Lions’ defeat to Italy.

This is not the first time Rashford is telling off White supremacists in England and America. In the aftermath of the murder of Blackman George Floyd in March last year by a white police officer, the Manchester United striker was among the Black players in English Premier League who protested the brutal killing with inscription of “Black Lives Matter” or BLM slogan on their jerseys.

He also took part in pressuring EPL to recognise “taking-the-knee” at the start of matches in the league as condemnation of racial abuse of people of African ancestry worldwide.

Gareth Southgate’s side were beaten 3-2 on spot kicks in the Euro 2020 final, with Rashford, Jadon Sancho and Bukayo Saka the three players to see their efforts fall short, leading to the trio receiving abhorrent racist messages online.

Reflecting on his miss in the shootout, Rashford admits that “something didn’t feel quite right” before he stepped up to take the penalty, while he has vowed the Three Lions will “be back stronger”.

“I don’t even know where to start and I don’t even know how to put into words how I’m feeling at this exact time,” Rashford wrote in a statement published on his social media accounts. “I’ve had a difficult season. I think that’s been clear for everyone to see and I probably went into that final with a lack of confidence.

“I’ve always backed myself for a penalty but something didn’t feel quite right. During the long run-up, I was saving myself a bit of time and unfortunately the result was not what I wanted.

“I felt as though I had let my team-mates down. I felt as if I’d let everyone down. A penalty was all I’d been asked to contribute for the team. I can score penalties in my sleep, so why not that one? It’s been playing in my head over and over since I struck the ball and there’s probably not a word to quite describe how it feels.

“Final. 55 years. One penalty. History. All I can say is sorry. I wish it had [have] gone differently. Whilst I continue to say sorry, I want to shout out [to] my team-mates. This summer has been one of the best camps I’ve experienced and you’ve all played a role in that. A brotherhood has been built that is unbreakable. Your success is my success. Your failures are mine.

“I’ve grown into a sport where I expect to read things written about myself. Whether it be the colour of my skin, where I grew up or, most recently, how I decide to spend my time off the pitch I can take critique of my performance all day long, my penalty was not good enough, it should have gone in but I will never apologise for who I am and where I came from.

“I’ve felt no prouder moment than wearing those Three Lions on my chest and seeing my family cheer me on in a crowd of tens of thousands. I dreamt of days like this. The messages I’ve received today have been positively overwhelming and seeing the response on Withington had me on the verge of tears.

“The communities that always wrapped their arms around me continue to hold me up. I’m Marcus Rashford, [a] 23-year-old black man from Withington and Wythenshawe, South Manchester. If I have nothing else, I have that.

The scenes across social media and near Rashford’s home in Withington, where a mural to the player was vandalised in the aftermath of Sunday’s result, have seen an outpouring of support for the player and his team-mates Sancho and Saka.

England boss Southgate paid tribute to the players’ character in the immediate aftermath of the shootout defeat, while captain Harry Kane offered a sharp rebuttal to those hurling abuse.

At the scene of the Rashford mural, meanwhile, messages of goodwill and support have been posted, while the Red Devils star shared numerous positive letters he had received from school children.

That such abuse continues to blight the English game, even as Rashford, along with his England team-mates, continue to make huge strides to combat discrimination, remains a stain upon the country’s sporting reputation.

England’s first appearance in a major final since they won the 1966 World Cup is more than vindication for the progress made by a youthful squad on the pitch, who will look to regroup ahead of September’s 2022 World Cup qualifiers.

The Three Lions are expected to continue with Southgate at the helm, while Rashford and his team-mates will now focus on club matters ahead of the start of the 2021-22 season.

Details emerge of how a doctor based in Florida, US, planned assassination of Haitian President Moïse