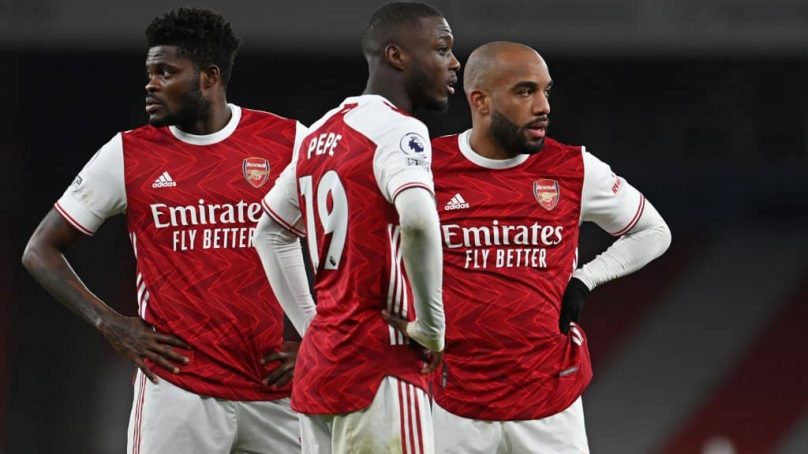 Mikel Arteta’s Arsenal will on Tuesday kick off their preseason preparations for the 2021-22 season a match against Hibernian FC with many unanswered questions about strengthening its squad that looked out of depth throughout last season.

Only 13 senior team players are available for the match that might also see a few youngsters promoted from the academy share the forum with the big hitters like Pierre Emerick Aubameyang, Alex Lacazette, Thomas Partey and Nicholas Partey.

From heartbreak to Hibernian, Arteta’s side travelled north on Monday with a group of around 30 players ahead of their Easter Road clash, which will be followed by a trip to Ibrox to face Rangers on Saturday.

That second fixture will be the first to feature the new 2021-22 home kit, with Arsenal seemingly going to all the measures they can to convince Andre Onana to sign with their new Ajax inspired strip.

Someone who obviously won’t be joining up with the squad is Bukayo Saka. The star boy suffered agony with England as his deciding spot-kick was saved by Gianluigi Donnarumma, confirming the Three Lions’ defeat to Italy.

It has been confirmed that Saka will now be granted three weeks rest, the most deserved break of any footballer on the planet after his incredible Premier League campaign with Arsenal and valiant efforts at Euro 2020.

Kieran Tierney, Bernd Leno, Granit Xhaka and Lucas Torreira are all also still on holiday following their international excursions, with two, possibly three, of those players potentially making moves elsewhere before they come back. It’s not looking likely though.

However, the senior players on the plane have been confirmed. Aubameyang, Lacazette, Pepe, Partey, Emile Smith Rowe, Hector Bellerin, Cedric Soares, Rob Holding, Sead Kolasinac, Joe Willock, Calum Chambers and Pablo Mari have all ventured to Edinburgh and are in line to feature in some capacity.

There is also an expected debut for Nuno Tavares, the only signing so far this window. It will be strange to see Kolasinac in an Arsenal shirt once more and due to the recency of the Portuguese’s arrival it may well be that the Bosnian starts on Tuesday with Tavares brought on later.

Albert Sambi Lokonga, meanwhile, is undergoing a period of isolation and will be announced in time for the following tour of the Unites States.

What is exciting is the youngsters who will join up with the first team and push for minutes. Omar Rekik is confirmed on the plane and stands a strong chance of involvement with only two senior central defenders on the plane.  The other youngsters angling for some minutes include are Tom Smith (19, GK), James Hillson (20, GK), Harry Clarke (20, defender), Omar Rekik (19, defender), Jack Henry-Francis (17, midfielder), Omari Hutchinson (17, winger)

Missing out are Gabriel Martinelli, who is heading to Tokyo to play for Brazil’s Olympic team. Gabriel Magalhaes had been selected but he’s picked up a knee injury. Having played a number of tournament warm-up games in recent weeks, he’s now on holiday. Lucas Torreira, who has been playing the Copa America with Uruguay, is also enjoying some downtime.

William Saliba has been excused from the camp. He’s been pictured in Marseille where he’s due to finalise a season-long loan deal at the Stade Velodrome.

The rest of the stuff is sheer gossip. Emile Smith Rowe’s usual number 32 is being worn by keeper James Hillson suggesting the midfielder is in line for a lower squad number when his new deal is announced soon. The club photographer has been careful not to let the cat out of the bag.

Flo Balogun is wearing number 26 having previously held 38. We’re also waiting to see how Rob Holding’s hair transplant worked out. We’ve not seen any photos of him so can’t confirm his presence.

Arsenal are expected to wear the yellow away kit against Hibs and will then wear the new home shirt at Ibrox on Saturday. The home kit will be launched later this week.

Tuesday match will be the first time Hibernian have hosted fans at Easter Road since March 2020.

Hibernian and Arsenal have played each other three times. The first was all the way back in April 1926. The friendly, organised as part of a deal that saw Scotland international goalkeeper Willie Harper make the switch to North London took place in front of a crowd of around 4,000 people at Highbury.