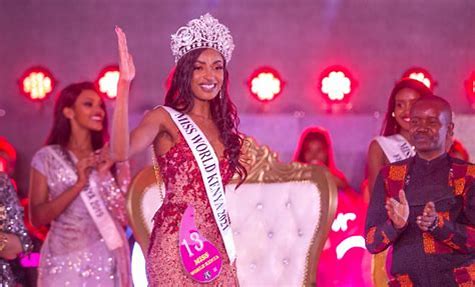 Beauty, brains and holiness: Pageantries have roots in Christianity, remind the living of wholeness of humanity

As a country, Kenya has had its fair share of fetching lasses who ran away with beauty pageants on national and international runways.

Beautiful women like the late Gaudencia Aura and Khadija Adams, easily come to mind when we talk about pageantry. Service to mankind, though, remains a remote subject, although it was given immense prominence in the Bible and Christiandom

However, with all due respect, there is doubt if any of the beautiful women can hold a candle to Esther, the world’s first recorded beauty queen whose exploits are celebrated in a nationwide holiday, no less.

Esther was a Jewess orphan living in exile with her relative Mordecai. We read that King Ahasuerus threw what we now call “parte after parte” lasting the whole of 180 days!

This was to show off his fabulous empire, which stretched from India to neighbouring Ethiopia – what was known as Abyssinia.

The Kingdom of Abyssinia was founded in Stone Age during the reign of Axum, changed to Ethiopian Kingdom after successive military conquests. The Ethiopian Kingdom was established by kings of the Solomonid dynasty, who, claiming descent from no less a figure than the Biblical King Solomon.

During this era of conquest, beauty and the brains resided sided by side. They were thought to be complimentary a chink through which you peer into wisdom.

Beauty was revered! It competed for a place in human mind with wisdom. The crowns winners of pageantries are adorned with have a long, religious history! It is a celebration of the mundane.

More fundamentally, beautiful women, the priciest jewel a man relished and cherished, were protected with continental-size jealousy. Wars in ancient kingdoms, like in days of King Solomon, were triggered by the beauties of women. In the absence of war, it was party time.

That the reason King Ahasuerus threw the mother of all parties for Esther. Giddy with the free-flowing wine, the King also sought to give the people a glimpse of his wife, the beautiful Queen Vashti. However, Vashti would hear none of it and refused to appear before the King as summoned.

This scandalised the royal household with some members of the kitchen cabinet warning the King that such defiance would sow seeds of a revolution in the women of the empire if a word of it leaked. Beautiful women were revered and feared in equal measure.

They bring empires and nations down – just ask Nigerians what a bevy of naked Persian beauties were doing in Viagra-powered President Sani Abacha’s bedroom when he breathed last. That is a by-the-way.

For it is written: Then Memukan replied in the presence of the king and the nobles, “Queen Vashti has done wrong, not only against the king but also against all the nobles and the peoples of all the provinces of King Xerxes. For the queen’s conduct will become known to all the women, and so they will despise their husbands and say, ‘King Xerxes commanded Queen Vashti to be brought before him, but she would not come.’”

This very day the Persian and Median women of the nobility who have heard about the queen’s conduct will respond to all the king’s nobles in the same way. There will be no end of disrespect and discord.

“Therefore, if it pleases the king, let him issue a royal decree and let it be written in the laws of Persia and Medea, which cannot be repealed, that Vashti is never again to enter the presence of King Xerxes. Also let the king give her royal position to someone else who is better than she. Then when the king’s edict is proclaimed throughout all his vast realm, all the women will respect their husbands, from the least to the greatest.”

Vashti was thus to be assigned light duties.

The king and his nobles were pleased with this advice, so the king did as Memukan proposed.” With Vashti dethroned, there was a need for a replacement. Then the King’s advisers came up with the idea of a nationwide search for a beauty who would take the vacant position.

The pageant was held and Esther emerged the winner, earning with it the title of the Queen. In between, a schemer by the name Haman crawled out of the woodwork targeting not only Mordecai for refusing to bow and pay homage to him, but the entire Jewish race living in exile.

Pained to the core, Mordecai sought the help of Esther in averting the looming catastrophe but the young lass, now Queen, was hesitant, telling Mordecai the rota that was to be followed in going to the King’s presence.

Through third parties which they used to communicate Mordecai reminded Esther that she too would not survive if the looming purge was to take place.

Beauty and brain were being tested!

He sent back this answer: “Do not think that because you are in the king’s house you alone of all the Jews will escape. For if you remain silent at this time, relief and deliverance for the Jews will arise from another place, but you and your father’s family will perish. And who knows but that you have come to your royal position for such a time as this?”

Then Esther sent this reply to Mordecai: “Go, gather together all the Jews who are in Susa, and fast for me. Do not eat or drink for three days, night or day. I and my attendants will fast as you do. When this is done, I will go to the king, even though it is against the law. And if I perish, I perish.”

The Bible records further that Esther managed to rescue the Jews from the planned holocaust and to this day Israelis and Jews across the globe celebrate the Holiday of Purim (March 17) in remembrance of Esther’s courageous deeds.

Talk of beauty with a purpose!