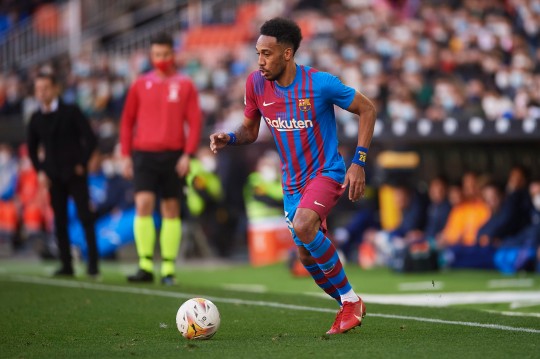 Pierre-Emerick Aubameyang’s career at Barcelona is off and running as the former Arsenal striker scored a hat-trick in the 4-1 win over Valencia on Sunday.

After joining as a free agent in the closing stages of the January transfer window, Aubameyang failed to score in his first three appearances for Barca. But the 32-year-old had struck twice in the first half against Valencia and he completed his hat-trick after the break with a stroke of fortune as he deflected Pedri’s goal-bound effort.

Pedri was initially credited with the goal before it was subsequently changed, and Aubameyang has now become the first player in the 21st century to score a hat-trick in Ligue 1, the Bundesliga, the Premier League and La Liga.

‘He has scored goals his entire career,’ said Xavi. ‘It was to be expected that he would score here soon, too. He goes very well to space. He is mature. He is very intelligent. I am delighted with him. These two [subsequently changed to three] goals will go very well for him.’

The coach observed that Aubameyang has four traits that set him apart: “He has scored goals all his career. He gets into space well. He is mature, intelligent, humble, and positive.”