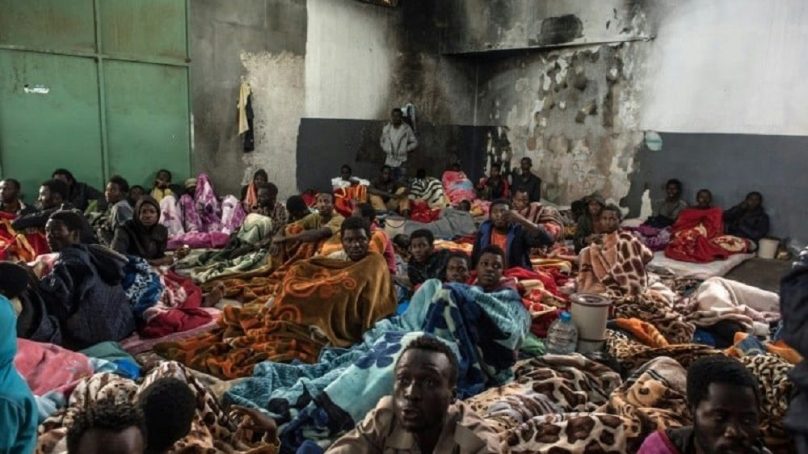 The UN High Commission for Refugees (UNHCR) says people released from Zintan refugee detention centre in Libya were given emergency cash assistance and other support from UN partners, including cash cards that can be used at over 4,000 shops in Tripoli, but did not specify when the support was provided.

The claim, though, it disputed.

Libya is not a signatory of the 1951 refugee convention, and Libyan authorities only allow UNHCR to register people from nine nationalities as refugees, even if others have legitimate claims to protection under international law.

UNHCR’s ad hoc standing in Libya makes it difficult for the agency to do everything from obtaining visas for staff to providing cash assistance – even to people who do fall under the agency’s mandate – according to Vincent Cochetel, the UN agency’s special envoy for the Central Mediterranean.

Refugees and asylum seekers who spoke to The New Humanitarian in Tripoli said they sometimes had to wait up to eight months for an appointment with UNHCR, and that it was difficult to register with the agency or access the limited amount of assistance offered. Many said they felt like they had been left on their own by the international community and were struggling to make ends meet.

Assistance from NGOs – primarily funded by the same European governments pushing Libyan authorities to curb migration – is also not forthcoming.

“There are many NGOs present; there are coordination meetings; there is a lot of talking. But then I don’t see any efficient response implemented on the ground,” one international aid worker, who asked to remain anonymous for security reasons, said.

“It’s like steam that just vaporises somewhere in the air,” they said. “And it’s still a question to me why it is like this because there are a lot of funds coming to implement projects.”

In response to the dismal conditions in Libyan detention centres in recent years, UNHCR and other international organisations have sought to establish alternatives, especially housing in urban areas.

“It’s very easy to convince donors that you can open a shelter for survivors of violence and sick migrants, minors, families, people who have been released from detention,” a local aid worker in Libya, who asked to remain anonymous because they weren’t authorised to speak to the media, told The New Humanitarian.

The owners of apartments and houses in Tripoli also have an incentive to rent to international organisations because they pay in dollars, according to the EU meeting notes. But the involvement of international actors often only provides a veneer of protection.

Because irregular entry into Libya is criminalised, asylum seekers and migrants face the constant threat of being apprehended by Libyan authorities and returned to detention centres. The weakness of Libya’s government institutions also means that the criminals and armed groups that control territory in many parts of the country can target and exploit asylum seekers and migrants with impunity.

“If something happens in the shelter, like someone passes away due to a serious medical condition, you will be obliged to call the police, and they may arrest people. This has happened in the past,” the local aid worker added.

Apartments and houses where asylum seekers and migrants live are also frequently targeted for robberies and violent crimes. Because they have no legal status, the victims are often afraid to go to the police or are met with indifference or hostility when they do.

The Libya Platform, a coalition of local civil society organisations that works closely with asylum seekers and migrants, says support provided by UN agencies and international organisations is inadequate: A UN support hotline often goes unanswered, and for those who are able to access some services, they are rudimentary and do little to alleviate the dire situation many people are in.

“We saw negligence by UNHCR and lack of reactivity and skills of field partners to deal with human rights violation victims and vulnerable groups in general,” said Tarik Lamloum, a Libyan activist who is part of the Libya Platform and regularly visits detention centres to deliver humanitarian assistance.

“We are left with the only option: to cross the sea.”

UNHCR says its staff strive to provide comprehensive answers to all requests received via its support hotline and other forms of communication, adding that the number of personnel available to respond is limited. The agency did not respond to the other allegations.

For Diletta Agresta, a legal expert at the Association for Juridical Studies on Immigration (ASGI), an Italian NGO, the fact that UN agencies and international NGOs try to improve the situation for asylum seekers and migrants without conditions actually changing acts as a fig-leaf for European Union migration policies that perpetuate the cycle of abuse in Libya.

Like other asylum seekers and migrants who had been in Zintan, Tumzi is now in Tripoli and lives with a constant feeling of fear and abandonment. “We are ignored by the international community. We are always waiting, but nothing [changes],” he said. “We are left with the only option: to cross the sea.”