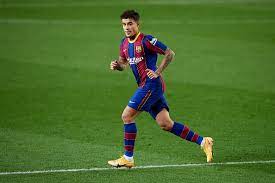 A mad scramble among a series of Premier League teams could be about to begin after Barcelona confirmed an in-demand star Philippe Coutinho will be leaving the club.

Barcelona have been one of the most intriguing clubs to follow this summer owing to their financial strife. Gone are the days of mega-buck buys. Instead, they have been replaced by canny free agent acquisitions the likes of Sergio Aguero.

Their change in strategy stems from the huge debts they have incurred amid the Covid-19 pandemic. After a protracted saga, Lionel Messi has verbally agreed to fresh terms that will keep him at the Nou Camp until age 39.

A massive 50 per cent pay cut was stated to have been agreed, further demonstrating the club’s weakened position. As such, several-high profile names have been rumoured to be on the chopping block to ease their financial strain.

Antoine Griezmann and Miralem Pjanic could depart, but the most interesting player to English audiences is Philippe Coutinho.

The Brazilian failed to live up to the hype since joining from Liverpool in 2018. His nightmare in Barcelona was further exacerbated last season when suffering a knee injury that had ruled him out since January.

However, according to Football Espana – citing Diario Sport – Barcelona’s medical team have given the playmaker the all-clear to compete again. But in doing so, they have come to the conclusion that Coutinho’s days at the club are now over. The 30-year-old has two years remaining on his current deal which leaves the door open to both a loan or permanent approach.

Either would benefit Barcelona’s immediate finances, and Arsenal, Leicester, Everton and Liverpool have all been linked in recent months.

A move for Coutinho would undoubtedly be a gamble. But his best football was played during his time in England and a fresh start in familiar territory may be just what Coutinho needs to bring out his best once more.

Arsenal are close to sealing the arrival of Anderlecht’s Albert Sambi Lokonga, but Arteta wants more.

Indeed, he wants an attacking midfielder in the shape of Lyon’s Aouar to add goals and assists from deeper. The Gunners wanted him last summer, but did not want to fork out his £55 million ($76 million) price tag.