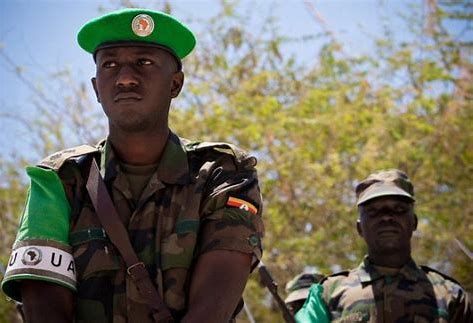 Five Ugandan soldiers to the African Mission in Somalia (Amisom) have been found guilty of killing civilians in Goloweyne, a court martial sitting in Mogadishu, Somalia, has ruled.

A statement from the African Union headquarters released on Sunday November 14, 2021, two days after the ruling, confirmed the court’s verdict and disclosed that the soldiers would be sent back to Uganda to serve their sentences.

According to the statement, “As a follow up to the Board of Inquiry that investigated allegations of civilian casualties in Goloweyn on August 10, 2021, by Amisom soldiers, the government of the Republic of Uganda, as the troop contributing country to which the implicated soldiers belong, established a court martial in Mogadishu, Somalia, to try the accused soldiers.”

The court sat from November 2-12, 2021 and after reviewing all the facts and evidence, including witness statements, the court martial on November 12, 2021, found the soldiers guilty of killing the civilians.

They will be repatriated from Somalia to Uganda to serve their sentences, the statement added.

In response to the ruling, the Ugandan People Defence Force Contingent and Amisom Sector 1 Commander, Brig-Gen Don Nabasa, said, “As soldiers, we have a responsibility to protect lives and property. Our mission in Somalia is to degrade Al-Shabaab and other armed groups. In doing so, we absolutely have every responsibility to protect the civilian population, and this is very clear in our rules of engagement.”

The Amisom Force Commander, Lt-Gen Diomede Ndegeya, said, “As a military component of Amisom, we will, among our ranks, continue to ensure strict compliance with our obligations as we carry on with the task of pursuing and degrading Al-Shabaab, ISIS and other likeminded armed groups, as well as protecting population centres and securing critical infrastructure and sensitive sites in Somalia”.

The Special Representative of the Chairperson of the African Union Commission and Head of Amisom, Ambassador Francisco Madeira, thanked the governments of Uganda and Somalia for their co-operation and support.

Ambassador Madeira said he deeply regretted the killing of the civilians and has, once again, conveyed his and Amisom’s condolences to the bereaved families for the tragic incident.

“As a mission, Amisom remains deeply committed to the cause of peace, security and stability in Somalia and the protection of the local population in strict respect of International Humanitarian Law (IHL), International Human Rights Law, and Amisom rules of Engagement. All these instruments are part and parcel of our core values and mandate,” Madeira said.