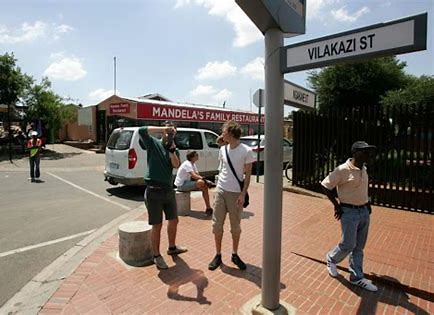 It always happens this way, Nkosi says. First the fibre; then the surveillance cameras. The cameras are useless unless there’s reliable connectivity to send their video feeds back to a control room where they can be monitored by humans and algorithms.

This is Vilakazi Street in Soweto, a historic suburb of Johannesburg – a sprawling megacity now birthing a uniquely South African surveillance model influenced by the global surveillance industry and set to influence it in turn. Civil rights activists say it’s already fuelling a digital apartheid and unravelling people’s democratic liberties.

Five years ago, this wouldn’t have been possible. Neither the city’s infrastructure nor existing video analytics could support sending and processing footage at the necessary scale. But then fibre coverage expanded, AI capabilities advanced, and companies abroad, seeing an opportunity, began dumping the latest surveillance technologies into the country. The local security industry, forged under the pressures of a high-crime environment, embraced the menu of options.

The effect has been the rapid creation of a centralised, coordinated, entirely privatised mass surveillance operation. Vumacam, the company building the nationwide CCTV network, already has over 6,600 cameras and counting, more than 5,000 of which are concentrated in Joburg. The video footage it takes feeds into security rooms around the country, which then use all manner of AI tools like license plate recognition to track population movement and trace individuals.

Over the years, a growing chorus of experts have argued that the impact of artificial intelligence is repeating the patterns of colonial history. Here in South Africa, where colonial legacies abound, the unfettered deployment of AI surveillance offers just one case study in how a technology that promised to bring societies into the future is threatening to send them back to the past.

Nkosi, a Sowetan born and bred, has spent 15 years fighting against all manner of injustices – gender-based violence, lack of water and sanitation, and, most recently, the mass surveillance that threatens civil liberties. He sounds more amused than bitter as we drive by the towering heaps that have leached

Thus far Soweto has been spared the cameras, precisely because it is poor. Vumacam originally placed them where it could find paying customers. As cramped streets give way to highway and highway to affluent areas, these installations come into view: steely grey poles with thick fat discs in the middle where clusters of CCTV cameras hang like bats, their gaze trained on the roads.

By the time we reach Rosebank, an upscale suburb of Johannesburg, the poles spring from concrete faster than we can count. Next to a mall, Nkosi, now on foot, stops and gapes at the latest fixture: a camera quadruple the size of all the others.

“That is the first time – that big, big, big thing – that is the first time I’ve seen it,” he sputters with growing animation. “This is definitely facial recognition,” he speculates, meaning that the camera could record video at high enough resolution for such technology to work. “Jesus Christ. No way, no way.”

Asked about that speculation, Vumacam says it doesn’t use facial recognition and will not consider using it until the technology is adequately regulated. “We don’t believe that facial recognition technology as it stands (from any provider) is reliable enough for ethical use,” says Vumacam’s CEO Ricky Croock.

NEC XON, the South African subsidiary of the world’s largest facial recognition provider, which says the companies had tentative talks over two years ago about adding that feature to Vumacam’s platform, adds that the cameras aren’t suited for the technology, which Vumacam confirms.

So maybe it’s coming. Maybe it’s not. That’s the thing about a privatised model of public surveillance. It’s really hard to know.

The first thing Rob Nichol wants to show off is the control room. Down the hall from a shared office space, the CEO of the private security company AI Surveillance opens the door to a cavernous room with screens plastered on the walls.

The screens stream footage from cameras around the city that the company has been hired to monitor. They’re also mainly for show. The real action happens below, on two rows of computers, where employees monitor Vumacam’s Proof 360 software platform.

Rather than display dozens of video streams at once, Proof 360 uses AI and other analytics to show only the footage that triggers security alerts. These include systems for license plate recognition and detection of “unusual” activity.

The latter is provided by a company known as iSentry, which originally developed it for the Australian military. The software trains on 100 hours of footage so each camera can learn “normal” behaviour, and then it flags anything deemed out of the ordinary. Each camera can also be configured with additional hard-coded rules. For example, it can be programmed with barriers that people should never cross and zones where cars should never stop.

At a monitoring station in the first row, the alerts appear one by one on a security worker’s screen. In one a man’s been flagged for running, in another a woman for standing in the hall while texting, in a third a woman for walking too close to a car. The operator reviews each one and clicks a “Dismiss” button on all of them. There’s also a comment box and a button marked “Escalate.”

An escalated alert is kicked back to the second row, where a dispatch team coordinates a response based on the alert type and the client’s instructions. Sometimes that means texting an on-site security guard to dispel loiterers. Other times it means calling the police to arrest a suspected criminal.

Nichol points to a wanted-car alert, which has pulled in information from a database that the South African Police Service or SAPS, maintains for vehicles linked to criminal activity. “It is very important that you take note of these vehicles,” he reads in the comments that SAPS wrote as a warning to security guards tasked with responding to the alert and apprehending the perpetrators.

“They are involved in multiple home invasions and murders and are very dangerous. Use high-calibre weapons and will not hesitate to shoot. Call your security company and SAPS IMMEDIATELY.”

Vumacam uses a subscription-based model: entities registered with the private security industry regulator as well as SAPS and metropolitan police departments can rent access to whichever cluster of camera-feeds they want within the Proof 360 platform. In 2019, the company charged 730 South African rand (roughly $50) a month per camera. It declined to give its latest pricing.

The bulk of Vumacam’s subscribers have thus far been private security companies like AI Surveillance, which supply anything from armed guards to monitoring for a wide range of clients, including schools, businesses, and residential neighbourhoods. This was always the plan: Vumacam CEO Croock started AI Surveillance with Nichol shortly after founding Vumacam and then stepped away to avoid conflicts with other Vumacam customers.

Today a Vumacam subscription has become a de facto standard for security companies that operate in and around Johannesburg’s more affluent suburbs and commercial areas.

“I don’t see a public space provider being able to effectively provide public security without the cameras,” says Ryan Roseveare, who lives in Craighall Park, one of the first suburbs in the country to adopt Vumacam.