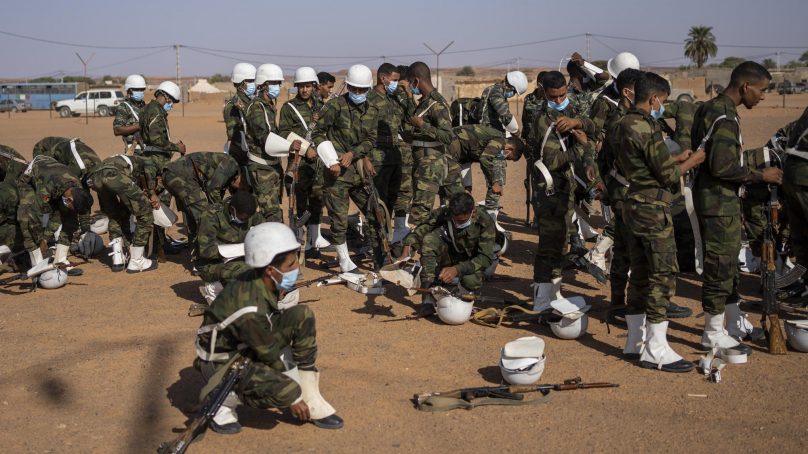 As a glowing sun sank behind the sandy barrier that cuts across the disputed territory of Western Sahara, Sidati Ahmed’s battalion launched two missiles that sizzled through the air and then followed with an artillery attack.

Within minutes, a barrage of mortar shells flew in the opposite direction, from Moroccan positions, landing with a thick column of smoke in the barren desert of what is known as Africa’s last colony.

“Low-intensity hostilities,” as a recent United Nations report describes them, have raged for the past year along the 2,700-kilometer (1,700-mile) berm – a barrier second in length only to the Great Wall of China that separates the part of Western Sahara that Morocco rules from the sliver held by the Polisario Front, which wants the territory to be independent. Both sides claim the area in its entirety.

After 30 years of ceasefire, the Polisario Front has taken up arms again in its quest for an independent Western Sahara. The flaring up of the conflict is fuelled by frustration among new generations of Sahrawi refugees who believe that the wait for a referendum on self-determination, as promised by the United Nations, has only played on Morocco’s benefit while their lives languished in the unforgiving desert camps.

Drawing attention to a conflict with few known casualties in a vast but forgotten corner of the Sahara Desert has been a challenge for the Polisario, whose leaders want to leverage the guerrilla-war-reminiscent imagery ahead of a key UN meeting next week, on October 28.

Security Council members are due to vote on extending the mission for the Minurso, the force that for years, and at a cost of over $4 billion, has overseen the ceasefire while supposedly paving the way for a referendum.

For nearly 30 years this swath of North African desert about the size of Colorado – that sits on vast phosphate deposits, faces rich fishing grounds and is believed to have off-shore oil reserves – has existed in limbo, awaiting a referendum that was supposed to let the local Sahrawi people decide their future.

Instead, as negotiations over who would be allowed to vote dragged on, Morocco tightened its control of the territory, which was a Spanish colony until 1975.

Last year, the Polisario Front announced that it would no longer abide by the 1991 ceasefire that ended its 16-year guerrilla war with Morocco.

The decision was fuelled by frustration among younger Sahrawi – many of whom were born in refugee camps in Algeria, have never lived in their ancestral homeland, and are tired of waiting for the UN – promised referendum.

“Everybody is ready for war,” said Ahmed, who spent more than half of his 32 years in Cuba before returning to enlist for battle when the truce ended last year.

“We are fed up. The only thing that is going to bring our homeland back to us is this,” Ahmed said pointing at his AK-47 weapon, as he stood on the frontline in Mahbas. The region, at the crossroads of Morocco, Mauritania and Algeria, is where most of the exchanges of fire take place.

Ahmed is typical of a generation of Sahrawi youth, most of whom travelled abroad to study – from Spain to Libya – but returned to the camps to form families. And they’ve told their elders that they don’t want to die in exile, with no future to offer to their own children.

“Life abroad can be tempting,” said Omar Deidih, a baby-faced soldier and cybersecurity student who on a recent visit to the frontline organised by the Polisario spoke to foreign reporters in fluent English. “But the most important thing is that we have fresh blood in this new phase of the struggle.”

The possibility, however remote, that clashes could escalate into a full-out regional war may be the Polisario’s only hope of drawing attention to a conflict with few known casualties in a vast but forgotten corner of the desert.

Many people in the camps feel that efforts to finally settle the status of Western Sahara have languished since Morocco proposed greater autonomy for the territory in 2004.