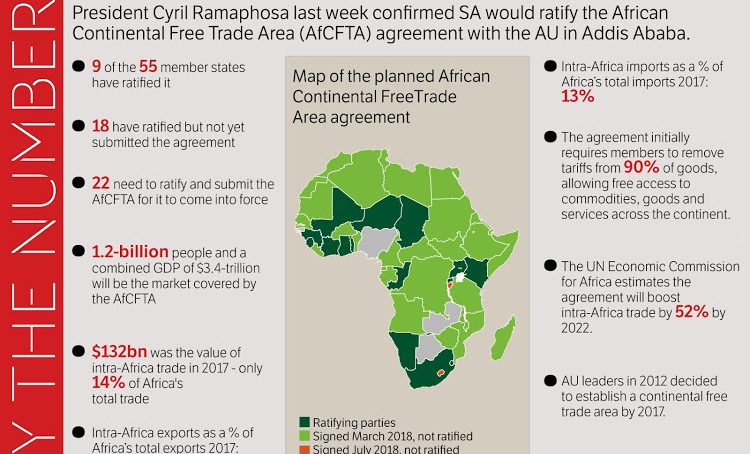 The start of trading under the African Continental Free Trade Area (ACFTA) agreement on January 1 has created the largest free trade zone in the world by country following the ratification of the agreement by 34 countries.

After years of haggling, suspicion and uncertainty the realisation ACFTA has been hailed as a historic point for the continent. Intra-Africa trade is expected to be the beginning of a workable framework for a modern African economy.

An African economy that will allow free movement of labour and goods within member-states – a drastic change from the current siloed economic structures and hopes to foster intra-African trade, industrialisation and self-reliance.

Economic co-dependency or cooperation between sovereign states is not a new economic strategy. Europe has sought to achieve this at the regional or supranational level through the establishment of the European Union.

However, the recent decision of the United Kingdom to leave the EU shows that the goal of integration is not without its challenges.

The United States has functioned for so long as a collage of economic co-dependent states that few pay much attention to the analogies with modern supranational regional organisations such as the European Union.

However, on closer inspection, it is clear that the same rules of a shared currency, open borders and the full economic integration of the states played a large and important role in the growth, stability and development of the US.

There are similar associations in Asia – the Association of Southeast Asian Nations (ASEAN) and in the Arab region, the Council of Arab Economic Unity (CAEU).

Africa has also championed regional economic integration, but never at the level or scale of the AfCFTA and, indeed, not as successfully as in other world regions. African economic communities like ECOWAS, SADC, EAC and others, have failed to substantially integrate their disparate national economies that would have served to protect the region from exploitation by its neighbours to the east and the west.

With consumer population projections favouring Africa and a combined consumer and business spending projection of $6.7 trillion by 2030, the time is now for Africans to look inwards for solutions to the continent’s economic woes.

The sports, media and entertainment industry are areas where the continent continues to show promise. African content competes favourably on the radio and streaming networks on a global scale, spurring key investments from media giants like Disney and Netflix.

The continent is also a major contributor in the world sports industry particularly in consumption and talent exportation. The discussion must now revolve around the question of how the ACFTA and intra-African collaboration can be best employed to secure these industries’ futures.

The answer: developing local industrialisation, production and distribution infrastructures for the consumption of sports, media and entertainment. This is key to the success of the AfCFTA in these industries.

It will be near impossible to unlock the true value of this agreement without Africa first fixing its infrastructure deficit and this is relevant even beyond the sports and entertainment sectors. African countries must aim to localize its production and distribution processes as much as possible to control a larger part of the African market.

For example, the music industry today is primarily dominated by streaming consumers and with the rise of movie streaming platforms like Netflix and Amazon TV, the film industry is leaning towards this model as well. From the onset of the digital revolution, China was branded “isolationist” for regulating the entrance of businesses like Google and Facebook into the country to give local alternatives a chance to develop.

This move may have been branded as a security move, but it has also proven to be an economic boon to Chinese competitors in these spaces. With this agreement, the time is ripe to develop African digital infrastructures to leverage upon the continent’s population resource in industries like music and film where there is already an appreciable global presence. It is indeed the right time to create our own entertainment giants!

In the sports arena, rather than constantly exporting our best talents, local investment in sports like football, for example, can provide the required infrastructure to ensure that African athletes can thrive right here on the continent.

This will serve to effectively reduce talent flight, a major challenge in the industry today. It could eventually place African leagues at par with the popular European leagues where so many players of African descent consistently perform excellently.

It is still too early to gauge how the AfCFTA will affect the sports and entertainment industry, since the agreement is still in its early stages of implementation. We are also yet to observe how committed member States are to this intended collaboration.

One thing is for sure though; any initiative that welcomes the free movement of goods and services within Africa and promotes intra-African investments and cooperation on intellectual property rights is a huge step in the right direction for a continent with much to benefit from greater economic integration.

Africa braces for a digital storm as industries reset their operations