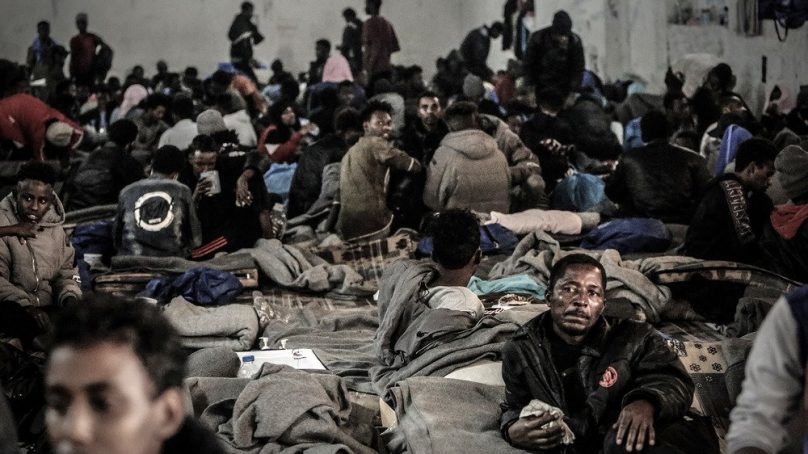 The EU-backed Libyan Coast Guard has intercepted more than 13,000 asylum seekers and migrants at sea this year, preventing them from reaching Europe – already a greater number than in all of 2020. Those intercepted are returned to Libya and sent to detention centres where a well-documented cycle of extortion, torture, gender-based violence and trafficking has been taking place for years.

Following reports this week of minors being sexually assaulted by Libyan guards, the European Commission, the EU’s executive body, said on June that migration detention centres in the country needed to close.

The EU-backed Libyan Coast Guard has already intercepted more asylum seekers and migrants in the Mediterranean this year than in all of 2020. Those returned to Libya are automatically sent to detention centres where they face extortion, torture, and trafficking.

EU efforts to work with Libyan authorities to improve conditions in the centres have so far been ineffective, according to human rights and aid groups.

A plan last year to close the centres most notorious for abuse appears to have been more about consolidating political control than improving conditions for detainees.

UN agencies and NGOs attempted to coordinate support for detainees being released from a facility in the town of Zintan. The shortcomings of that effort underscore the limitations of the international aid response.

Former detainees said they felt abandoned by the international community and saw little choice but to keep trying to cross the Mediterranean to Europe, often restarting the cycle of interception, detention, and abuse.

At the same time, the EU is facing intensifying scrutiny over its hand in the system due to its support for the Libyan Coast Guard – including the use of its aerial surveillance assets to coordinate interceptions and returns to Libya. It is criticised more broadly for offshoring its efforts to curb migration to a country where the international community is helpless when it comes to protecting asylum seekers and migrants, both in and out of detention.

Médecins Sans Frontières (MSF), one of the few NGOs periodically granted access to provide assistance inside Libyan detention centres, said on June 22 it is temporarily suspending activities in two facilities in the capital, Tripoli, due to an escalation of tensions inside since February. Over this period, MSF staff documented several deaths, treated detainees for fractures and gunshot wounds, and witnessed people being beaten by guards as they attempted to leave their cells for consultations with doctors.

Last year, Libya’s Department for Combating Illegal Immigration (DCIM), which oversees the country’s 20 or so official migration detention centres, decided to shut down and replace some of the facilities most notorious for abuse.

“We are opening centres in areas beyond the control of the militias or outside towns where human traffickers are active,” Mabrouk Abd al-Hafiz, the head of the DCIM, told The New Humanitarian in an interview last December.

On its surface, the plan appeared to be a long-awaited step toward reform, and at least five detention centres have been shuttered since September last year, including Dhar el-Jebel in the town of Zintan, which The New Humanitarian visited in December while it was being shut down. The other four were in the coastal towns of Al-Zawiyah, Zuwara, Sabratha and Al-Khoms, all known hubs for the people smuggling trade.

In addition to the closures, the DCIM has lived up to its promise to open new facilities. Euphemistically referred to as “Gathering and Return” centres – and controlled by commanders close to Abd al-Hafiz – these include two in the desert far from the Libyan coast where conditions are reportedly harsh and the same cycle of abuse is taking place.

Notes obtained by The New Humanitarian from a May meeting of a working group monitoring EU-funded aid projects in Libya said conditions in one of the new centres, called Baten Al Jabal – around 190 kilometres southwest of Tripoli – are “reportedly brutal; guards routinely extorting ransoms for release… [an] escape attempt on April 1 led to [the] shooting of two migrants.”

For years, the EU has been encouraging Libyan authorities to improve the human rights situation for migrants and refugees in Libya. But the DCIM has either been unable or unwilling to do so. For the EU, the continuation of abuses poses a “reputational risk”, according to Human Rights Watch.

Since 2017, Italy and the EU have been providing training, funding, and equipment to the Libyan Coast Guard. The support has helped contribute to a significant decline in the number of people crossing the central Mediterranean, but the majority of the nearly 65,000 people – mainly from East and West Africa, but also from as far away as Bangladesh – intercepted in the past four and a half years have been sent to DCIM-affiliated detention centres. Others have simply disappeared off the official radar.

In both cases, critics argue that the EU’s support for the interceptions and returns makes the bloc complicit in the abuses taking place in the facilities where people inevitably end up.

A new desert patrol unit, which Libyan authorities say is also benefiting from EU border management funding and equipment, started patrolling the country’s land borders last October to prevent asylum seekers and migrants from reaching departure points on the coast. People picked up by the unit are also sent to the new “Gathering and Return” centres in remote desert towns, according to the DCIM.

Prospects for actual reform of the detention centres by Libya’s new Government of National Unity (GNU), which took office in March, appear slim due to the continued power and influence of militias in the country: They see controlling the facilities as a lucrative source of revenue and a way to gain political legitimacy.

“The only meaningful protection is to provide safe shelter from abusers and immediate evacuation.”

Since the GNU took office, a number of European leaders – including EU commissioner for Home Affairs Ylva Johansson – have visited Libya to reaffirm the importance of cooperating to control migration and improve conditions in detention centres.