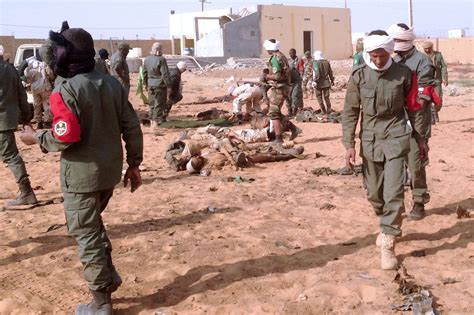 Africa: Atrocities by Russian ‘hired guns of Wagner Group’ are now familiar narrative of ‘everywhere, bodies were dropping to the ground’

The man knew what to expect from Islamist fighters. They had appeared at his door for years, demanding money or livestock – the taxes he paid to survive. Then one morning in March, the threat in his rural community suddenly had a confusing new face: White men in military fatigues, yelling in a language he did not recognise.

“They were shooting people. People in their homes,” he said. “Everywhere, bodies were dropping to the ground.”

At least 300 people are believed to have been killed in the man’s town of Moura, in central Mali, although he and other witnesses suggest the toll could be far higher. Similar accounts have emerged across the West African nation since hundreds of Russian mercenaries joined the Malian army this winter in the fight to reclaim territory from groups loyal to al-Qaeda and the Islamic State.

The hired guns of the Wagner Group – a covert arm of the Kremlin, according to the United States and Western allies – have been repeatedly accused of war crimes, leaving a trail of atrocities across the Middle East and Africa. Profits flow back to Moscow, according to Western intelligence officials and security researchers, helping prop up Vladimir Putin’s government at a time of growing economic isolation over its war in Ukraine.

In Mali, where insurgents have overrun vast stretches of the country, witnesses told The Washington Post that men they believe to be Russian operatives have killed scores of innocent people in recent months under the guise of restoring peace.

“There are quite a lot of eyewitness accounts on the presence of White soldiers speaking an unknown language,” said Héni Nsaibia, senior researcher at the Armed Conflict Location and Event Data Project (ACLED), which documents violent events around the world. Mounting visual evidence, he added, “strongly suggests they are private Russian military contractors and not conventional Russian forces.”

Between 800 and 1,000 Russian mercenaries are now active in Mali, according to US military officials focused on Africa, providing services that cost Mali’s military government up to $10 million monthly. They guard the presidential palace, officials say, and are tasked with tracking extremists in the scrubland.

The number of Malians fleeing to neighbouring Mauritania has surged in the months since Wagner landed. Registrations at a refugee camp near the border have more than quadrupled since February, according to the UN refugee agency. And groups that track civilian deaths at the hands of security forces say fatalities have skyrocketed.

Wagner operates in secrecy, masking its activities with an evolving network of shell companies that often avoid formal paperwork. But documents and imagery reviewed by The Post, some of them previously unreported, point to a heightened Russian presence in Mali.

Satellite photographs illustrate the build-up of a military base outside the airport in the capital, Bamako, which Western officials say is used by Wagner operatives. Flight records reveal Russian Air Force jets making unpublicised trips to and from that city. Drone videos and surveillance photos captured by French authorities and reviewed by The Post show White men in uniform alongside Malian forces.

The Malian government has denied hiring Wagner, saying it works only with Russian military instructors. But Russian officials have publicly contradicted that claim, calling the operatives “private” contractors. The line is blurry, experts say, as many Wagner agents are Russian military veterans.

The Kremlin did not respond to a request for comment. When asked by The Post in March about Wagner’s expanding footprint in Mali, Kremlin spokesman Dmitry Peskov said, “We have nothing to do with the activities of private military companies abroad.”

The Malian government and army did not respond to messages and calls seeking comment.

Ever since Russia seized Ukraine’s Crimean Peninsula in 2014, poisoning relations with the West, it has pushed to build alliances elsewhere. Putin paid special attention to African nations, where movements to slash ties with former colonisers like France were gaining steam – particularly in Mali, a nation of 21 million. Despite a nine-year international military intervention led by Paris, extremists now dominate two-thirds of the territory.

After French President Emmanuel Macron announced last year that Paris planned to withdraw thousands of troops, Bamako turned to Moscow. Relations with France collapsed. Malian officials kicked out the French ambassador and told all French troops to leave “without delay.”

Not long after that, the White strangers in military fatigues showed up, said the man who described the bodies falling. The Post is withholding the names of witnesses because they fear retaliation by the Malian government.

The man is a musician from the town of Moura, once a sleepy community of farmers and herders. The peace was shattered when al-Qaeda militants invaded the country in 2012. They settled in Moura seven years ago, giving residents an ultimatum: Support us, leave with nothing, or die. Many in the town of roughly 10,000 chose to stay and adhere to uncomfortable new rules.

“The jihadists made everyone dress like them and grow beards like them,” the musician said. “For men, it’s hard to tell us apart. You are not a jihadist but you look like a jihadist.”

Insecurity has fuelled waves of civil unrest in Mali, making room for army officers to overthrow two presidents in the past two years. The new military leaders pledged to bring in help to end the bloodshed.