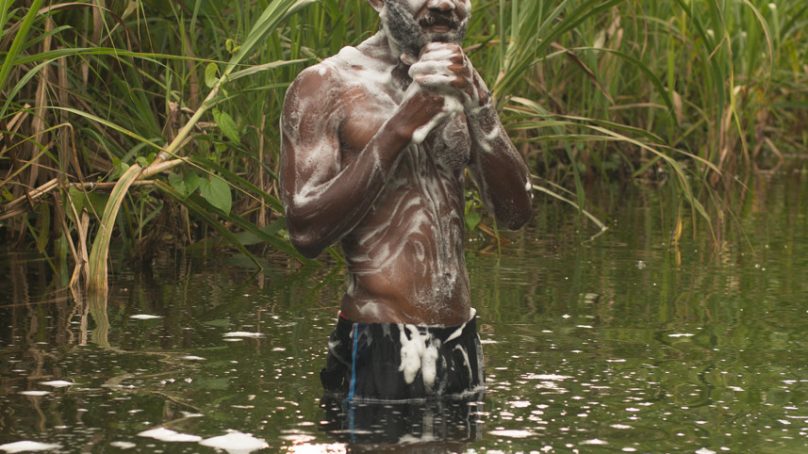 Showering wasn’t really a thing in 18th-century France. There weren’t showers, for one. Clean water was scarce. To contemporary sensibilities, the pre-revolutionary French probably could have used at least a rinse. Especially since public sanitation was rudimentary and the streets held sewage runoff.

In Patrick Süskind’s 1985 historical novel Perfume, he describes this period as foul: “…There reigned in the cities a stench barely conceivable to us modern men and women.”

But the French did their own version of a daily toilette. Many doused themselves in cologne and changed into a fresh linen shirt. At the other extreme, first-century Romans bathed for multiple hours a day in large groups (albeit without soap).

In many places in the world, including parts of India, the local watering hole or river is still the spot to clean one’s body – and clothes, and dishes. As Katherine Ashenburg wrote in her 2008 historical account of bathing, The Dirt on Clean, “Even more than in the eye or the nose, cleanliness exists in the mind of the beholder.”

That perspective might be good to keep in mind for those engaged in the current online debate over showering. This month, the endearingly scruffy actor Jake Gyllenhaal gave a freewheeling interview to Vanity Fair in which he said he finds bathing “less necessary.”

He continued, “I do also think that there’s a whole world of not bathing that is also really helpful for skin maintenance, and [our bodies] naturally clean [themselves].” He also said that he is “baffled that loofahs come from nature.”

That “world of not bathing” appears to be located right around the axis of Hollywood, given the number of celebrities that have chimed in on their own philosophies of hygiene. On an appearance on Dax Shepard’s Armchair Expert podcast this summer, actors Ashton Kutcher and Mila Kunis described their laissez-faire approach to bathing themselves and their kids.

Mr Kutcher said, “I wash my armpits and my crotch daily and nothing else ever.” When it comes to the kids, he said, “If you can see the dirt on ‘em, clean ‘em, otherwise there’s no point.”

After the subject exploded on Twitter, Dwayne “the Rock” Johnson weighed in on the opposite end of the spectrum, saying he showered three times a day. These celebrities declined to comment further on the topic for this column.

Doctors themselves are split on the right amount to bathe. However, many stick to every 24 hours or so as a rule of thumb.

“We recommend that patients bathe every day,” said Dr Corey L. Hartman, a board-certified dermatologist and founder of Skin Wellness Dermatology in Birmingham, Ala. He clarified that it was not necessary to aggressively rub drying soap over every part of one’s body daily – it’s fine to let the suds flow over your legs.

But, he noted, “You have so much accumulation of dirt and sweat and oil and environmental debris that you don’t even realise that you’re carrying around every day on your skin, that you really need to get that off. It encourages bacteria, it encourages overgrowth of other organisms, and it’s just a good idea to let that go.”

It’s not just celebrities, however, who resist the gospel of the daily shower. Although many Americans – with and without medical training – preach the importance of a daily shower and deodorant, that routine has been increasingly called into question of late for various reasons. Some shower-reducers cite the importance of maintaining the skin’s precious barrier and “microbiome” – the good bacteria that live on its surface.

In a 2016 article in the Journal of the European Academy of Dermatology and Venereology, the skin barrier and its microbiota were described as a “shield that protects the body against external aggressions.”

Although that shield is generally able to withstand soap and water, some people that suffer from conditions like eczema find that frequent bathing with harsh soap aggravates their skin. Environmentalists hope to save water by showering less (the average shower uses about 20 gallons of water).

And then there are the nonconformists that are just tired of adhering to conventional grooming standards.

James Hamblin, a physician and author, laid out a case for bathing less in his 2020 book Clean: The New Science of Skin and the Beauty of Doing Less. In it, he describes his own journey away from the tyranny of soap. Five years before he wrote the book, he had left a high-paying job as a doctor to try his hand at journalism, and found himself wanting to “consume less” overall.

He cut back on alcohol, caffeine, broadband internet, driving – and showering. Although at the outset the experiment was mostly about efficiency, he ended up questioning all of our preconceived notions of cleanliness. He describes the book as “an invitation to embrace the complexity of the world around us and on our skin.”

To this day, the only part of his body Dr Hamblin washes regularly with soap are his hands.

The enforced isolation of Covid gave many folks the opportunity for a controlled experiment in bathing frequency. For example, Jim Arnold, a 66-year-old writer in Los Angeles, said that during the pandemic he was going out less, and noticed that in the dry climate where he lives he didn’t sweat much.

So he started showering once a week, in a kind of return to his Wisconsin childhood, when as one of eight kids baths were a weekly occurrence. He was amused when celebrities such as Mr Gyllenhaal took their own stands against overbathing, thinking, “Well, I’m not the only one who has realized that you don’t need to do this.”

Mr Arnold also likes saving water in drought-plagued California, although he admitted that “in the grand scheme of things, probably a single person in a shower is not a huge use of water.”

Sarah Craigh, 41, a Saskatchewan, Canada-based communications and project coordinator, who showers about once every three days, also pointed to the environmental contribution she was making. She explained, “Knowing that I’m saving a bunch of water every week by not washing as much makes me feel good.”

A few years back Ms Craigh had an epiphany while sitting in the bath: Why am I bathing if I’m not dirty? It led her to question the “social conditioning” around bathing, but also the perfumes and potions that are relentlessly marketed to us. She said that these products “are trying to mask our natural being and it’s just not necessary.”

This is a heady brew: environmentalism, skin health, marketing. But to many people the question boils down quite simply to: Do they smell?

Mr Arnold, Ms Craig and Dr Hamblin all stated they do not. Dr Hartman countered that one might not be the best judge of one’s own body odour. He said, “That’s up to everyone around you to determine, dear, not you, you’re not going to smell it.”

To Patrick Bartosch, 41-year-old communications consultant in the Netherlands who read Dr Hamblin’s book Clean, it’s not worth the risk.

“Even though I fundamentally agree with the book, I still shower daily or at least every other day when I don’t leave the house too much.” He sweats a lot due to hyperhidrosis, explaining, “If I do not shower regularly, I would simply not be able to socialise.”

Maybe in the end, bathing is more about others than it is about us.