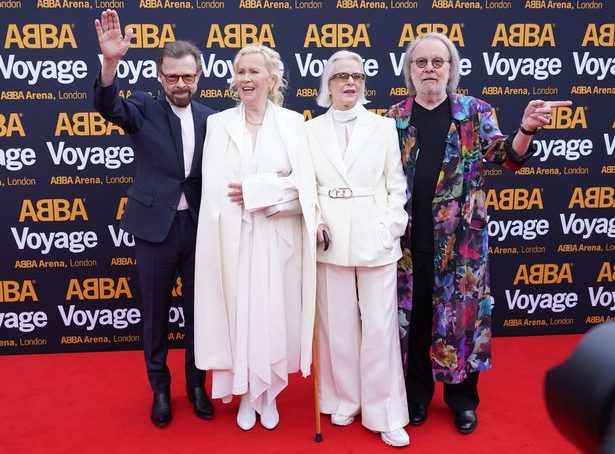 Benny Andersson, Agnetha Fältskog, Anni-Frid Lyngstad and Björn Ulvaeus sent music lovers into a frenzy as they reunited for the first time in the UK for 40 years. The foursome walked the red carpet at the world premiere of their new Voyage show, featuring the foursome as digitally created younger selves – or “ABBA-tars”.

They spent 40 minutes talking to the world’s press and at one point Agnetha and Anni-Frid even burst into a rendition of Mamma Mia. The foursome even did an impromptu walkabout over to adoring fans who has come from across the globe.

Wearing an all-white outfit, Agnetha said: “It’s been emotional being together again and seeing all the fans who came to see us.”

Asked when she was last in the UK as a four, she added: “It was such a long time ago that I was here, I don’t travel very much.”

Anni-Frid, who arrived with a walking stick, said: “It was so exciting to come back together as a group after so many years.”

And they told how they were delighted to be in London all together after so many years.

Bjorn said: “London means so very much to us. We had the good fortune to win the Eurovision Song Contest in England of all places. I mean there could not have been a better place to win and it rubbed off on the entire world.”

Writing in the programme notes, Agnatha added: “I love London. I never forget our celebrated shows at the Royal Albert Hall with fantastic audiences and a warmth that went right into my soul. And then there was a victory in Brighton in 1974 of course.” They have only made very sporadic appearances in public since – and never in the UK.

In 2016, they did perform one song together at a Swedish restaurant to celebrate 50 years of the Andersson-Ulvaeus song-writing partnership: The Way Old Friends Do.

But ever since the band reformed to create new album Voyage, there has been increasing speculation the group would put in a public appearance too…and in the UK as well. Benny and Bjorn were both in London to announce the new music in September 2021, while Agnetha and Anni-Frid were absent.

While both women were fully involved in the new music and Voyage show, both left it to Bjorn and Benny to undertake promotional commitments. Agnetha also has a fear of flying, which precludes trips to the UK, unless by road which it’s thought she undertook to get to London.

The album earned rave reviews and later topped the charts in 17 countries, including Britain. At the time they also announced the Voyage “ABBA-tar” shows, a “revolutionary” live concert experience using motion-capture technology, staged in a purpose-built arena in London.

It has been created with the help of George Lucas’s visual effects company and is a huge step up from existing hologram tours in the past.

Agnetha said how the whole band laughed at each other dressed in CGI outfits.

She said: “It was a very unusual experience. For a whole month we got into our spacesuits and helmets and performed our songs. A fantastic team sat behind hundreds of monitors, following it all from tip to toe to capture our movements and facial expressions. It got a little hot under the lights and the spots but there was nothing for it but to carry on, sometimes all four of us wondered what we had gotten into but we had many wonderful laughs looking at each other. “

Anni-Frid said it was difficult at first to grasp her digital self before realising it was all spot-on. She added: “I can certainly see myself in the digital figure. The gestures, the facial expressions, the eyes that express all sorts of feelings. It’s absurd but it’s real.

Agnatha agreed. She says “Now we’re sitting and watching ourselves from a distance. It’s an incredible experience seeing everything once it is all in place. The results are outstanding and we’re once again fascinated by the technical wizardry. I’m only a fourth of it but I’m humbled by it all and the fine people who have supported us all over the years.”

Benny’s son Ludvig works as a producer on the show, and he described the group as “artists at the peak of their creative process. Again.”

He said: “Agnetha, Frida, Benny and Björn got on a stage in front of 160 cameras, and almost as many VFX geniuses, and they performed every song in this show to perfection over five weeks, capturing every mannerism, every emotion, the soul of their beings. That becomes the great magic of this endeavour – that when you see this show, it is not a version of, or a copy of, or four people pretending to be ABBA. It is actually them.