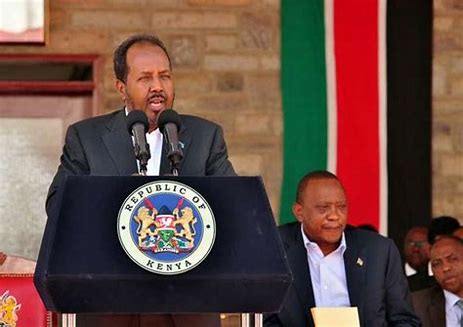 ‘We’re joined at the hip’, Kenya and Somalia presidents say as they rejig turbulent diplomatic ties

Somalia’s newly-elected President Hassan Sheikh Mohamud has recommitted to peaceful co-existence with neighbouring Kenya, telling his host, President Uhuru Kenyatta, that the two countries were joined at the hip, hence the need to put behind them recent diplomatic turbulence.

During Friday meeting in Nairobi, which may as well be the last before President Kenyatta hands over the reins of power to his successor after the August 9 elections, President Mohamud undertook to reactivate the moribund Joint Commission of Cooperation (JCC), which became dysfunctional after he was ousted from power by his predecessor Mohammed Abdullahi Mohamed Farmaajo six years ago.

During the meeting, the two heads of state signed a raft of agreements aimed at restarting trade between the Nairobi and Mogadishu. While the two countries had agreed to resume trade in fish and stimulant, khat, when Kenyatta was in Mogadishu to attended the swearing in of Mohamud, the Nairobi meeting gave the greenlight for the resumption of flights between the two capitals.

Consequently, Kenya’s national carrier Kenya Airways has been given the nod to resume flights to Mogadishu that were suspended almost two years ago following a diplomatic row.

In addition, Somalia has also allowed the resumption of miraa trade, fish and fish products. It was also agreed that both countries will also process visas for ordinary passport holders within 10 working days, and issue free courtesy visas on arrival for dignitaries and diplomats.

“For holders of Somali Service Passports, courtesy visas free of charge/gratis on arrival will be issued within forty-eight (48) hours, after completion of online visa application accompanied by a note verbale from the Ministry of Foreign Affairs and International Cooperation,” a communique issued after the meeting, said.

The communique further said that the border between the two countries will open, to promote trade and ease the movement of people.

President Kenyatta and President Mohamud agreed to face the pestilence presented by Al Qaeda-funded terrorist group, Al Shabaab, that is directly linked to insecurity and terrorist activities in in eastern Africa, and Somalia in particular.

Kenya and Somalia have been battling an al Qaida-linked insurgency that has killed thousands of civilians in the last decade. However, their relationship has been turbulent because of a dispute over the ownership of potential offshore oil and gas deposits, some of which United Nations says lie off their disputed maritime border.

In October last year the United Nation’s International Court of Justice decided largely in favour of Somalia’s claim, a ruling which Kenya rejected, saying it did not recognise the findings in the decision.

In December 2020, Mogadishu cut off diplomatic ties and accused Nairobi of meddling in its internal affairs after President Kenyatta hosted the political leadership from Somaliland, a breakaway state that Somalia’s central government does not recognise.

Pointedly, Sheikh Mohamud’s visit to Kenya is the first since the eruption of the maritime dispute, which involves a contested border. Nairobi and Mogadishu agreed in October 2021 that an amicable resolution of the maritime border dispute should be reached soon.

Another point of friction involves khat, a cultivated stimulant commonly known as miraa in Kenya. Somalia is Kenya’s biggest market for khat, but it stopped importation of the crop when international flights were suspended because of fear of the spread of Covid-19.

Mogadishu has lifted the ban, but under conditions that are keeping Kenyan khat traders out of business.