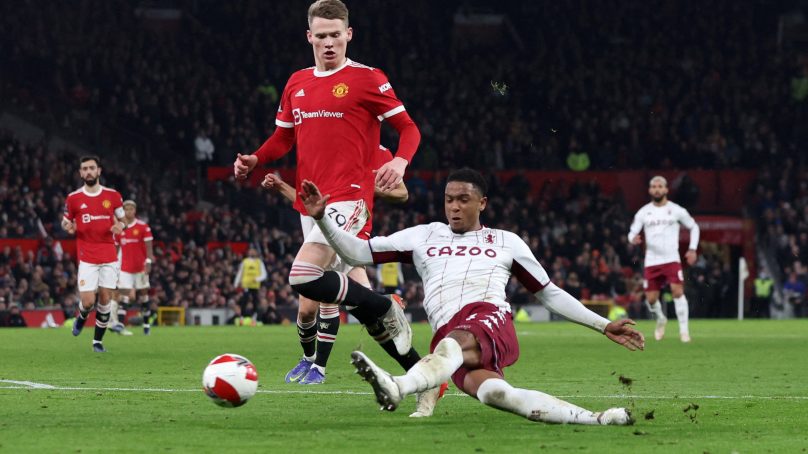 United won a pulsating cup clash at Old Trafford as Scott McTominay’s early header proved enough against Steven Gerrard’s side, who dominated for large spells and could count themselves unlucky to lose.

After a weekend of intrigue and upsets, the third round ended with an all-Premier League encounter and one of Liverpool’s greatest-ever players managing at Old Trafford for the first time.

Monday’s tie lacked goals but provided plenty of entertainment, with McTominay’s header the difference as Ralf Rangnick’s United secured a hard-fought 1-0 win to set up a fourth-round date at home to Middlesbrough.

Speaking to BBC Sport after the game, Rangnick said, “I think we showed a reaction after the Wolves game, that is what everyone expected from us. We knew it would be very difficult against Villa. In the first half I thought we did well. It could have been 3-2 or 4-3 to us at half time.

“In the second half we were on the counter-attack and we could have made more of those situations. We took the wrong decisions at times but when we changed to a diamond in midfield, we had more control.

“In the last 20 minutes we had more control. We fought well as a team together when it was important. In the end it was a good win. That was our goal, to proceed to the next round.”

On matchwinner McTominay, he added, “He is an academy boy, his energy is amazing. He now also starts scoring goals and also with some leadership skills. I wouldn’t be surprised if in a couple of years, he would be the captain of this team.”

Rangnick was also glad to see his side keep a clean sheet, adding, “We have to develop the team into a clean sheet team and that was another one today but still David de Gea was outstanding again for me today. I would have wanted him to have less saves in total, I think we had four or five shots on goal but again we can still improve even in that area.”

Meanwhile, United centre-back Raphael Varane admitted it had been another tough match for Rangnick’s men.

He said, “It was a difficult match. We had to suffer a lot on the pitch but together and I liked the spirit of this match. We had the opportunity to score more goals. When it was not possible to play higher up the pitch, we were compact and did not let them play easily. We had to be aggressive and as a result it is good. We are happy. We need more confidence; we need to be together and I think we are in a good way.”

As for the Villa goal ruled out by VAR, he added, “It was a long moment! I think it is the right decision. It is just a moment in the game and I think the spirit of the team was good.”

Meanwhile, TalkSport reports that Manchester United had VAR to thank for their progression through to the FA Cup fourth round, after a controversial decision masked a terrible second-half performance in a 1-0 win over Aston Villa.

United took the lead through Scott McTominay, when his midfield partner, Fred, whipped in a fantastic ball and the Scot had the simple task of glancing it into the back of the net.

Steven Gerrard’s side thought they were level just after half time, as former Liverpool man Danny Ings stuck the ball in the back of the net from a set-piece.

However, after a lengthy VAR check, referee Michael Oliver appeared to rule the goal out for a foul by Jacob Ramsey on Edinson Cavani, but there was confusion, even amongst the players, why it was disallowed.

Ings put the ball in the back of the net again five minutes later but, again, the goal was ruled out, this time for offside.