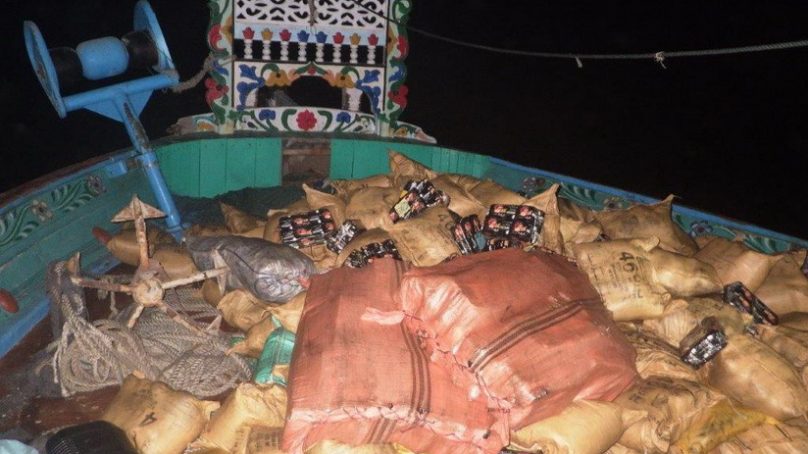 The US Navy’s guided-missile destroyer USS Nitze has seized an estimated $20 million worth of illegal drugs from a fishing vessel while patrolling the Gulf of Aden.

The USS Nitze was operating in support of Combined Task Force (CTF) 153, established by the Combined Maritime Forces in April to boost multinational collaboration in the Red Sea, Bab al-Mandeb and Gulf of Aden.

On November 22, the vessel seized 2,200 kilogrammes of hashish and 330 kilogrammes of methamphetamine as the fishing vessel transited international waters, the US Navy said.

“I am proud of the Nitze’s outstanding effort in support of our mission,” said US Navy Captain Robert Francis, commodore of CTF 153. “Our multinational taskforce was established to enhance maritime security in the Red Sea, Bab al-Mandeb and Gulf of Aden, and this major drug seizure shows our commitment to doing just that.”

CTF 153 is one of four taskforces organised under the Combined Maritime Forces, the world’s largest international naval partnership consisting of 34 member-nations. The multinational taskforces operate across the Middle East to promote rules-based international order at sea.

Over the past two years, forces from the Combined Maritime Forces have seized approximately $900 million worth of illicit narcotics while patrolling international waters across the Middle East.

Nitze is an Arleigh Burke-class destroyer named for Paul Nitze who served as the Navy’s 58th secretary in the 1960s. The ship began operating in the Middle East this summer and is deployed overseas as part of the USS George H W Bush Carrier Strike Group.