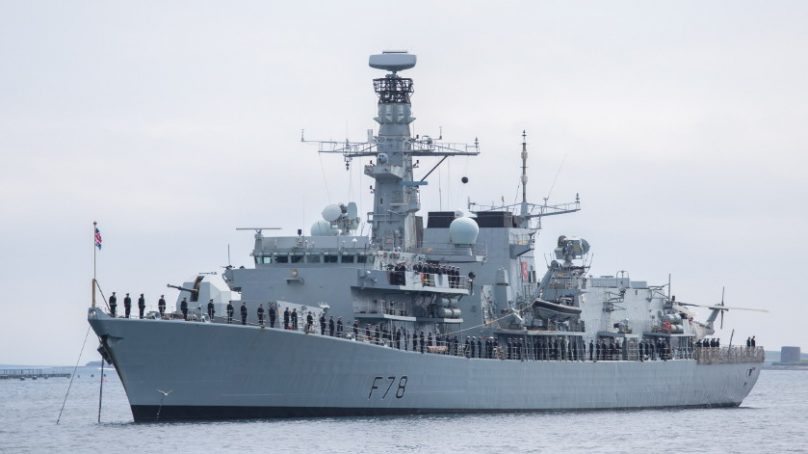 Sailors aboard the Royal Navy’s warship HMS Kent f the United Kingdom have trained alongside Kenyan Armed Forces during a visit to eastern Africa in first week of November.

The frigate had a busy period transiting the Indian Ocean, working with the multi-national task group Combined Task Force 150 on counter-narcotics operations.

The Royal Navy said in statement that the Kent’s embarked Royal Marines of 42 Commando earlier this month provided two-days of intensive boarding training with the Kenyan Special Boat Unit, a branch of the Kenyan Special Operations Squadron.

42 Commando deploy in small teams on Royal Navy warships around the world and provide the ships with the ability to intercept drug smugglers, pirates and terrorists. Their specialist knowledge and expertise was on show during the training, which culminated in a live boarding exercise with a Kenyan coast guard vessel, the Royal Navy statement said.

On land, a team of Kent’s firefighting and damage control experts trained with their Kenyan Navy colleagues at the recently-opened Kenyan Navy School of Firefighting.

Following initial briefs, they oversaw drills and procedures building on an established relationship with the UK’s Portsmouth-based HMS Phoenix Damage Control and Firefighting School and the Kenyan Navy.

Commander Matt Sykes, Commanding Officer of HMS Kent, said: “Kenya’s inclusion in the Carrier Strike Group deployment is very much a demonstration of the deep and longstanding UK-Kenya relationship.

“We are hugely grateful to the government of Kenya and the Kenyan Armed Forces for their support during HMS Kent’s visit.”

With some time left in the country, Tsavo East National Park and Taita Hills Wildlife sanctuary organised safaris for the ship’s company to see elephants, giraffes and lions – a highlight of the deployment for many of the sailors.

Meanwhile, the soldiers gave back to the community by volunteering personnel to help in painting two local children’s homes.

Reverend Moses Muli, Port Chaplain at the Mombasa Mission to Seafarers, said: “I was very much touched with the humility of the sailors who committed their resting time to do something that will leave a mark in people’s hearts.”

HMS Kent’s visit to Kenya comes shortly after a milestone visit to Bangladesh.