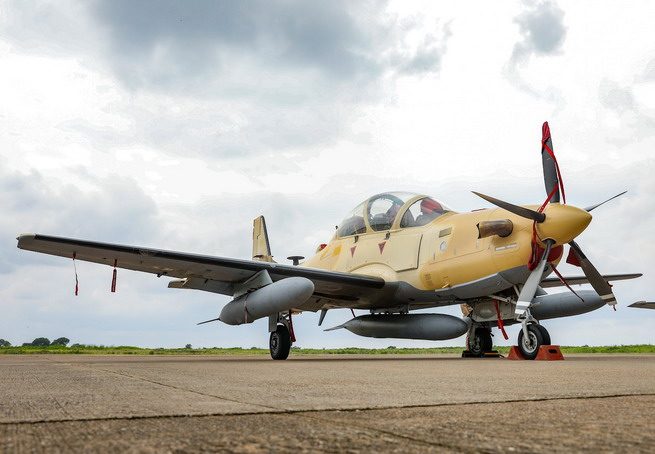 Embraer’s A-29 Super Tucano continues to accumulate orders in Africa, capturing a large share of the light attack and manned intelligence, surveillance and reconnaissance (ISR) market.

Developed in response to the demanding requirements of the Brazilian Air Force (FAB), the A-29 Super Tucano can perform a broad range of missions that include light attack, aerial surveillance and interception and counterinsurgency.

It is equipped with a variety of fourth generation avionics and weapons, including an electro-optical/infrared system with laser designator, night vision goggles, secure communications and data-link package. Its systems allow the gathering and sharing of time-critical information, and the aircraft can operate as part of a networked environment.

As the Super Tucano was designed from the start to have a light attack capability, it features built-in machinegun mounts, self-sealing fuel tanks and armour in critical locations. Its combat abilities have been well proven in Afghanistan and Colombia, during Amazon protection operations in Brazil and counter-narcotics operations in the Dominican Republic and Brazil, amongst others.

The A-29 is rugged and versatile, being able to operate from remote airstrips with little support. Together with low operating costs and high availability (above 90 per cent), this makes it suitable for tough African conditions.

In addition to combat roles, the aircraft is widely used as an advanced trainer. Its ability to simulate combat missions and upload and download flight data have made it a highly effective training platform, Embraer says.

As a genuine multi-mission aircraft, the A-29 is flexible enough to provide air forces with a single platform for light attack, armed reconnaissance, close air support, and advanced training, thus optimising their fleets.

Numerous Latin American countries have acquired the Super Tucano, including Brazil, Chile, Colombia, Ecuador and Dominican Republic. Other customers include Indonesia, Lebanon and the Philippines. In Africa, customers include Burkina Faso, Mali, Mauritania, Angola and, most recently, Nigeria.

Burkina Faso was the first African country to take delivery, receiving three aircraft in September 2011 for border patrol missions. In October 2012, Mauritania received its first of two aircraft, featuring sensor turrets for surveillance duties, although they have also been used for counter-insurgency missions, particularly against al Qaeda in the Islamic Maghreb. They replaced older Tucano aircraft.

Angola became the next African country to receive the type, with the first three of six aircraft arriving in April 2013. Angola acquired its Super Tucano aircraft for border surveillance missions, augmenting a fleet of 14 older Tucanos.

In July 2018, Mali took delivery of four Super Tucanos following a 2015 contract as part of the rejuvenation of the country’s military. They are configured for light attack and close air support.

Africa’s largest and most recent Super Tucano order came from Nigeria, which ordered 12 from the United States in 2018 under the Foreign Military Sale (FMS) programme, with the aircraft manufactured by Embraer and modified by the Sierra Nevada Corporation in the US.

The Nigerian Super Tucano deal is the largest FMS programme in sub-Saharan Africa. It includes spare parts for several years of operation, contract logistics support, munitions and a multi-year construction project to improve infrastructure at Kainji Air Base, where the aircraft are based.

This is not an idle boast; the A-29 Super Tucano is combat-proven in conflicts around the world, in fact it is the only combat-proven light-attack and reconnaissance turboprop platform currently in production and, as evidenced by a growing number of orders, the aircraft looks to have a bright future in Africa.