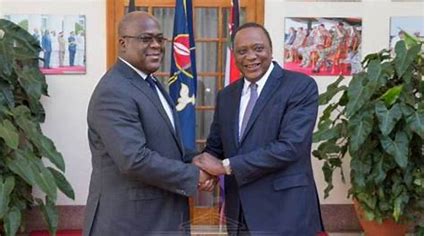 Former Kenyan President Uhuru Kenyatta, who is mediating the conflict in eastern Democratic Republic of Congo (DRC), has said that dozens of armed groups operating in the area are willing to “lay down their arms” if an agreement for a “lasting” peace can be reached.

Kenyatta has stated in the framework of the inter-Congolese dialogue mediated by the East African Community (EAC) that he has asked the participants to “open their hearts and explain how they see the problem”. “They have confirmed that they are ready to lay down their arms,” he said.

“They have also told me why they took up arms and that they want a lasting peace to lay them down. I am happy that no armed group refuses to lay down their arms, they all accept it,” he said, as reported by the Congolese radio station Radio Okapi.

He underlined that “there are things to see and to analyse so that everyone lays down their arms and that the lasting peace that everyone is looking for is achieved”, in the framework of a process that counts about 350 participants, among them 50 representing armed groups fighting in the east of the DRC.

Kenyatta also called for forgiveness for “the pain of the atrocities committed” over the past 20 years. “Lives have been lost, animals and minerals have been stolen by foreign nations that foment conflict while stealing minerals, leaving your children out of school and your mothers unable to give birth in hospital,” he denounced.

“DRC belongs to the Congolese and we are not here to discuss how an inch of territory should be cut off. Ours is a process to find ways to coexist and resolve conflicts that arise between you without having to take up arms,” said the EAC mediator, according to the Kenyan newspaper The East African.

In this sense, he also advocated to resolve the tensions between DRC and Rwanda around the March 23 Movement (M23), among the accusations of Kinshasa against Kigali for its alleged support to the rebel group, before reiterating that for this “all weapons in the hands of armed groups must be silenced and handed over to the government”.

Kenyatta further stressed that the M23 “cannot be part” of the talks process until it withdraws from the locations it occupies in eastern DRC. “The process underway involves only armed groups willing to surrender their weapons and put an end to hostilities”, he concluded.

For his part, Rwandan President Paul Kagame stressed that Kigali is in favour of achieving peace in eastern DRC and argued that “this problem would be easily solved if there were no country heading for elections next year and not trying to create an emergency to postpone them.”

Thus, he accused his Congolese counterpart, Felix Tshisekedi, of stirring up the conflict and reiterated that Rwanda “will not engage in avoidable skirmishes and will not entrench itself in the territorial integrity of others”. “We ask that this should also be the case for us,” he said.

Kagame therefore called for collective efforts to solve the security threat posed by the armed group Democratic Forces for the Liberation of Rwanda (FDLR) – made up of Hutu extremists, some of whom are responsible for the Rwandan genocide – and refused to blame the problem on Rwanda alone.

“It is unfortunate that it has become convenient that all the problems fall on Rwanda’s shoulders. We are always the ones to blame,” he lamented, as reported in the Rwandan newspaper The New Times.

“Comparing Rwanda and DRC, there is much more that our neighbour can offer, so these people have to be careful in addressing Congolese problems and even alleviate the problems by blaming Rwanda,” he said, before reiterating that Kigali does not support the M23.

Thus, the Rwandan president stressed that “the M23 is not Rwanda’s problem”. “At a certain moment we allowed them to stay in our camps as part of a process to solve the problem, at the request of DRC”, he explained, referring to the peace agreement signed between Kinshasa and the rebel group in 2014.

“I am starting to believe something I never believed in. It’s been so long that I can’t help it. Someone, somewhere wants this problem to exist forever because there are so many things at stake,” he has warned, before criticizsing the “narrative since 1994” that “perpetrators and victims (of the genocide) are the same.”