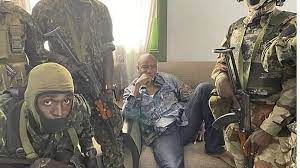 Guinea President Alpha Condé’s already tarnished democratic credentials took a further hit last year when he tweaked the country’s constitution to extend his decade in power. Now he has become the latest casualty of a wave of military takeovers sweeping a region that looked to have shed its “coup-belt” moniker.

In October 2020, just days ahead of his hotly disputed election for a third presidential term, Guinea’s Alpha Condé angrily brushed aside accusations he was staging a “constitutional coup” in an interview with France 24.

“It is extraordinary that I, who fought [for democracy] for 45 years, should be considered an anti-democratic dictator,” thundered the octogenarian head of state, Guinea’s first democratically elected president, who had recently tweaked the country’s constitution to hold on to power.

Asked whether he feared he might go the way of Ibrahim Boubakar Keita, the Malian president who was ousted in a coup just months before, Condé dismissed the comparison, touting his country’s relative stability when compared with its war-torn neighbour.

“In Guinea, we never had a rebellion, nor a civil war, nor a military coup,” Condé proclaimed, raising eyebrows among observers of the country’s turbulent politics. He went on to tout his reforms of the country’s military, highlighting its loyalty.

“Since my first election, we have reformed our armed forces,” Condé added. “Today, we have a republican army.”

Eleven months later, the 83-year-old president has been overthrown and detained by elite troops from Guinea’s GFS special forces unit – a product of the very reforms he touted.

Announcing the coup on state television on Sunday, Lieutenant-Colonel Mamady Doumbouya, a former French legionnaire tapped by Condé to head the GFS, said his men had taken over because of rampant corruption, mismanagement and poverty.

“We will no longer entrust politics to one man,” said Doumbouya, draped in a Guinean flag with about a half-dozen soldiers flanked at his side. “We will entrust it to the people.”

According to Alioune Tine, founder of the AfrikaJom Centre think tank and a former regional director for Amnesty International, the president’s refusal to cede power had made an uprising or a coup all but inevitable.

“By closing the door on a democratic transfer of power, Alpha Condé set the stage for his own downfall,” Tine explains.

Condé’s overthrow caps a steady slide from grace for the former champion of democracy, whose first election more than a decade ago was greeted with optimism by human rights activists and international observers.

Until then, Condé had been the chief critic of a succession of autocratic leaders, from Ahmed Sekou Touré, who ruled for three decades after the country’s independence from France in 1958, to the erratic Captain Moussa Dadis Camara, who seized power after the death of long-time strongman Lansana Conté in 2008.

Condé’s campaigning for democracy earned him a death sentence under Touré, forcing him into exile in France, where he became an assistant professor of human rights at the Sorbonne University. He was later jailed under Conté, whom he twice challenged at the polls, in 1993 and 1998.

When he was finally elected in 2010, in the country’s first ever open vote, NGOs voiced hopes of a fresh start after decades of corrupt, authoritarian rule and political turmoil.

“I will try in my small way to be Guinea’s Mandela and unite every son of Guinea,” Condé said in his inaugural address. “The restoration of social cohesion and national unity requires a collective look at our painful past.”

In the years since, however, critics say Condé largely failed to improve the lives of Guineans, most of whom live in poverty despite the country’s vast mineral wealth. His tenure was also marred by ethnic violence, brutal crackdowns on protests, and a deadly Ebola outbreak that killed more than 2,500 Guineans.

By the time Condé announced plans to scrap a constitutional two-term limit, his democratic credentials had already been eroded by widespread accusations of corruption, cronyism and autocratic rule.

“There was no real check on his power, so much so that with a rubber-stamp parliament he was able to implement constitutional reforms that gave him a third term,” says Professor Douglas Yates, a West Africa expert at the American Graduate School in Paris.

“Condé is allergic to criticism and averse to engaging with the opposition, whether it’s radical opponents or more accommodating ones,” adds Doudou Sidibe, a professor of political science at Gustave Eiffel University, east of Paris. “This has exacerbated political tensions and precipitated the military takeover.”

Both Condé’s constitutional manoeuvres and the manner of his ousting have stoked concerns of a broader degradation of democratic values in a region roiled by political instability and Islamist militancy.

Until recently, West Africa looked to have shed its “coup-belt” moniker, winning plaudits as a model of democratic progress on the continent. But a spate of attempted coups over the past year has fuelled fears that gains of the past decade are unravelling.

Since August 2020, there have been two military takeovers in Mali and an attempted coup in Niger. That’s on top of the recent power grab in nearby Chad, where Mahamat Idriss Deby declared himself the head of a ruling military council in the wake of his father Idriss Deby’s death in combat in April 2021. Meanwhile, Condé’s decision to ignore Guinea’s two-term limit echoed Alassane Ouattara’s disputed election for a third term as Ivory Coast’s president.

“We thought the continent had turned the corner in terms of democratisation, but now we see that advances have been rolled back,” said Sidibe, pointing the finger at a “problem of governance linked to the hyper-presidentialisation of political regimes”.

Speaking to France 24 earlier this year, regional security expert Niagale Bagayoko said the proliferation of military takeovers and the lack of a decisive international response had emboldened would-be coup leaders.

In particular, she said, “The international community’s passivity regarding the military takeover in Chad marks a major turning point,” undermining efforts to punish or sway coup leaders in other countries, such as Mali.

According to Guinean analyst Mamadou Aliou Barry, Condé’s attempts to stave off a similar fate may well have precipitated his demise.

“As early as May of this year, there were rumours of plans to arrest Colonel Doumbouya (the head of the GFS special forces), amid suspicions he was in contact with Colonel Assimi Goïta, Mali’s current strongman,” Barry told France 24’s sister radio RFI. Those rumours may have spurred Doumbouya into action, he added.

“In establishing the GFS, Condé wanted to set up a force that would be entirely at his disposal,” said Barry. “Unfortunately for him, he created a monster that eventually turned against him.”