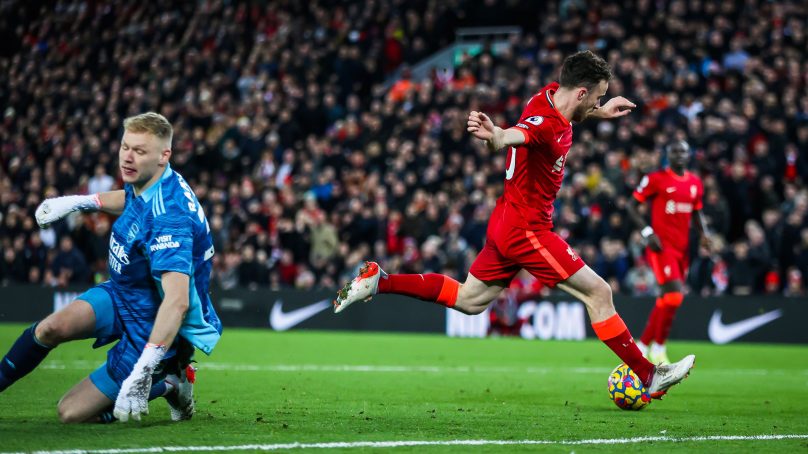 Arsenal’s eight-match unbeaten run in the Premier League came to an abrupt end as Liverpool produced a masterclass to dismantle their opponents 4-0 at Anfield.

Klopp and Mikel Arteta were both brandished yellow cards for a furious altercation in the first half, but it was the Liverpool boss who came out on top with an impressive victory against one of the league’s in-form teams.

After a relatively quiet opening half hour, the clash sprung into life after a touchline fracas between the two tacticians in the dugout.

The Gunners boss was seemingly livid after a heavy challenge by Sadio Mane went unpunished and the pair had to be separated by the fourth official.

Seconds later Salah fluffed his lines from point blank range as he mishit a low effort straight into the direction of Aaron Ramsdale.

The pressure then told shortly before half time as Mane headed home from a pinpoint delivery the right-back’s free-kick to make Anfield erupt.

Nuno Tavares then gifted the Reds a second with glaring error.

The Arsenal left-back, selected ahead of Kieran Tierney for the clash, passed the ball straight to Diogo Jota who calmly jinked past Takehiro Tomiyasu before evading Ramsdale and slotting home.

Liverpool got their third goal with 17 minutes to go when Mane broke away down the left to cross for Salah to volley home his 16th of the season.

Substitute Takumi Minamino scored with his first touch after being introduced, tapping home Alexander-Arnold’s low cross at the far post.

It was a big reality check for Arsenal, whose ten-match unbeaten run in all competitions was brought to halt in devastating fashion.

Whilst the performance by Liverpool demonstrated that they are not to be forgotten about in the title race.

A 3-2 defeat to West Ham before the international break was a blip but the six-time European champions will be right in the mixer for the title if they play like they did at Anfield for the rest of the season.