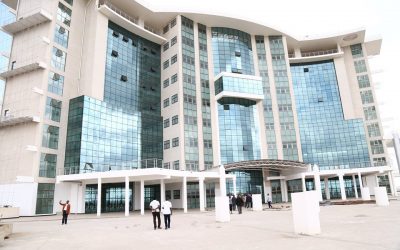 Kenya and Korea have launched a knowledge-sharing programme to support the implementation of a Digital Media City at Konza Technopolis.
The knowledge-driven economic cooperation under KSP is designed to share Korea’s development experiences with partner countries to promote sustainable socio-economic development.
South Korea Deputy Chief of Mission Dahee Song expressed hope during the launch that KSP would provide a national platform for professionals from either country to exchange ideas, discuss challenges and find solutions that foster economic development.
Ms Song noted that KSP designed to be a key driver of innovation and a key factor in economic development.
Through the programme, Song says Kenya would leverage on its experiences in development acquired through years of trial and error without having to re-invent a wheel.
KSP senior advisor Kim Joong Kyum says the programme would provide room for focused consultations on development of Konza Technopolis masterplan and its implementation.
Konza Technolis city was conceived during the first term in office of retired President Mwai Kibaki to make Kenya a technological hub in Africa.
After a lull attributed to funding challenges, the project situated 80 kilometres south of the capital Nairobi, kicked off with the construction of horizontal infrastructure. In a statement posted on its website, the government announced in September last year that it had entered into an agreement with an Italian firm to finance Phase One, expected to cost $372 million (Ksh39 billion).
“The Sh39 billion Konza Technopolis Phase 1 infrastructure project has officially commenced following the approval of the financing by the government of Kenya,” it said.
The statement goes further: “The government and UniCredit SpA of Italy signed a financing agreement in June 2017 to fund Konza Technopolis Development Authority horizontal infrastructure through engineering, procurement, construction and financing model to be carried out by the Impresa Construzioni Maltauro Group, one of Italy’s top players in the construction sector.”
During the knowledge sharing programme launch, Kim Joong Kyum said as a key player among industrially developing countries Kenya will benefit more because “Korea is regarded as one of the fastest growing economies in the world after the First World War”.
Konza Technopolis City is one of the key flagships projects in Vision 2030 that have been identified as flagship projects to hoist Kenya to the Newly Industrialised Countries by 2030.
Kyum noted that Vision 2030 – Kenya economic development Marshal-plan – has positioned Kenya in the region and Africa as an economic development launchpad.
Principal Secretary Ministry for ICT Jerome Ochieng said Korea government’s approval of Kenya’s proposal for the project had paved way for getting a grant to undertake a feasibility study and make policy recommendation for the proposed project.
“The proposed Digital Media City will have gaming, animation, film and photography centres that contribute to knowledge economy and innovation, which is the second most important pillar of Konza Technopolis Project,” said the PS.
The speech, delivered on his behalf by ICT Chief Finance Officer Christopher Kariuki, the PS said media and entertainment industries were some of the fastest growing sectors in Kenya.
He disclosed the sector is currently valued at $1.8 billion (Sh180 billion) and forecast to surpass $2.9 billion (Ksh300 billion by 2019.
“Digital media refers to content that is generated through computer technology, disseminated through the internet and accessed by an equally technology savvy audiences through digitised devices,” the PS explained.
Korea’s partners in knowledge sharing have increased over the years, from just two in 2004 to 55 in 2017.
– A Tell report