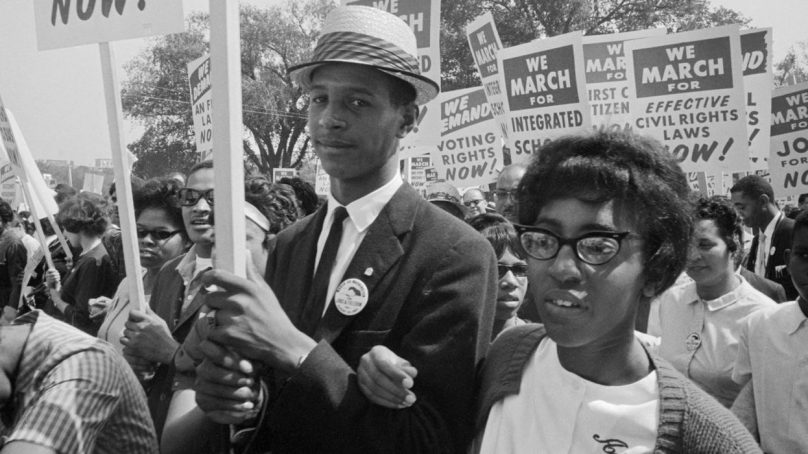 There are too many things that Just America can’t talk about for the narrative to get at the hardest problems. It can’t talk about the complex causes of poverty. Structural racism – ongoing disadvantages that Black people suffer as a result of policies and institutions over the centuries – is real.

But so is individual agency, and in the Just America narrative, it doesn’t exist.

The narrative can’t talk about the main source of violence in Black neighbourhoods, which is young Black men, not police. The push to “defund the police” during the protests over George Floyd’s murder was resisted by many local Black citizens, who wanted better, not less, policing.

Just America can’t deal with the stubborn divide between Black and white students in academic assessments.

The mild phrase achievement gap has been banished, not only because it implies that Black parents and children have some responsibility, but also because, according to anti-racist ideology, any disparity is by definition racist. Get rid of assessments, and you’ll end the racism along with the gap.

I’m exaggerating the suddenness of this new narrative, but not by much. Things changed astonishingly quickly after 2014, when Just America escaped campuses and pervaded the wider culture. First, the “softer” professions gave way. Book publishers released a torrent of titles on race and identity, which year after year won the most prestigious prizes.

Similar changes came to arts organisations, philanthropies, scientific institutions, technology monopolies and finally corporate America and the Democratic Party. The incontestable principle of inclusion drove the changes, which smuggled in more threatening features that have come to characterise identity politics and social justice: monolithic group thought, hostility to open debate and a taste for moral coercion.

Just America has dramatically changed the way Americans think, talk and act, but not the conditions in which they live. It reflects the fracturing distrust that defines our culture: Something is deeply wrong; our society is unjust; our institutions are corrupt. If the narrative helps to create a more humane criminal-justice system and bring Black Americans into the conditions of full equality, it will live up to its promise.

But the grand systemic analysis usually ends in small symbolic politics. In some ways, Just America resembles Real America and has entered the same dubious conflict from the other side. The disillusionment with liberal capitalism that gave rise to identity politics has also produced a new authoritarianism among many young white men.

Just and Real America share a scepticism, from opposing points of view, about the universal ideas of the founding documents and the promise of America as a multi-everything democracy.

But another way to understand Just America is in terms of class. Why does so much of its work take place in human-resources departments, reading lists, and awards ceremonies? In the summer of 2020, the protesters in the American streets were disproportionately Millennials with advanced degrees making more than $100,000 a year.

Just America is a narrative of the young and well educated, which is why it continually misreads or ignores the Black and Latino working classes. The fate of this generation of young professionals has been cursed by economic stagnation and technological upheaval. The jobs their parents took for granted have become much harder to get, which makes the meritocratic rat race even more crushing.

Law, medicine, academia, media – the most desirable professions – have all contracted. The result is a large population of overeducated, underemployed young people living in metropolitan areas.

The historian Peter Turchin coined the phrase elite overproduction to describe this phenomenon. He found that a constant source of instability and violence in previous eras of history, such as the late Roman empire and the French Wars of Religion, was the frustration of social elites for whom there were not enough jobs. Turchin expects this country to undergo a similar breakdown in the coming decade. Just America attracts surplus elites and channels most of their anger at the narrative to which they’re closest – Smart America.

The social-justice movement is a repudiation of meritocracy, a rebellion against the system handed down from parents to children. Students at elite universities no longer believe they deserve their coveted slots. Activists in New York want to abolish the tests that determine entry into the city’s most competitive high schools (where Asian American children now predominate). In some niche areas, such as literary magazines and graduate schools of education, the idea of merit as separate from identity no longer exists.

But most Just Americans still belong to the meritocracy and have no desire to give up its advantages. They can’t escape its status anxieties – they’ve only transferred them to the new narrative. They want to be the first to adopt its expert terminology. In the summer of 2020, people suddenly began saying “BIPOC” as if they’d been doing it all their lives. (Black, Indigenous, and people of colour was a way to uncouple groups that had been aggregated under people of colour and give them their rightful place in the moral order, with people from Bogotá and Karachi and Seoul bringing up the rear.)

The whole atmosphere of Just America at its most constricted – the fear of failing to say the right thing, the urge to level withering fire on minor faults – is a variation on the fierce competitive spirit of Smart America. Only the terms of accreditation have changed. And because achievement is a fragile basis for moral identity, when meritocrats are accused of racism, they have no solid faith in their own worth to stand on.

The rules in Just America are different, and they have been quickly learned by older liberals following a long series of defenestrations at The New York Times, Poetry magazine, Georgetown University, the Guggenheim Museum, and other leading institutions. The parameters of acceptable expression are a lot narrower than they used to be.

A written thought can be a form of violence. The loudest public voices in a controversy will prevail. Offending them can cost your career. Justice is power. These new rules are not based on liberal values; they are post-liberal.

The dead end of Just America is a tragedy. This country has had great movements for justice in the past and badly needs one now. But in order to work, it has to throw its arms out wide. It has to tell a story in which most of us can see ourselves, and start on a path that most of us want to follow.

all four of the narratives I’ve described emerged from America’s failure to sustain and enlarge the middle-class democracy of the postwar years. They all respond to real problems. Each offers a value that the others need and lacks ones that the others have. Free America celebrates the energy of the unencumbered individual.

Smart America respects intelligence and welcomes change. Real America commits itself to a place and has a sense of limits. Just America demands a confrontation with what the others want to avoid. They rise from a single society, and even in one as polarized as ours they continually shape, absorb, and morph into one another. But their tendency is also to divide us, pitting tribe against tribe. These divisions impoverish each narrative into a cramped and ever more extreme version of itself.

All four narratives are also driven by a competition for status that generates fierce anxiety and resentment. They all anoint winners and losers. In Free America, the winners are the makers, and the losers are the takers who want to drag the rest down in perpetual dependency on a smothering government.

In Just America, the winners are the marginalised groups, and the losers are the dominant groups that want to go on dominating.

It’s common these days to hear people talk about sick America, dying America, the end of America. The same kinds of things were said in 1861, in 1893, in 1933, and in 1968. The sickness, the death, is always a moral condition. Maybe this comes from our Puritan heritage. If we are dying, it can’t be from natural causes. It must be a prolonged act of suicide, which is a form of murder.

I don’t think we are dying. We have no choice but to live together – we’re quarantined as fellow citizens. Knowing who we are lets us see what kinds of change are possible. Countries are not social-science experiments.

They have organic qualities, some positive, some destructive, that can’t be wished away. Our passion for equality, the individualism it produces, the hustle for money, the love of novelty, the attachment to democracy, the distrust of authority and intellect – these won’t disappear. A way forward that tries to evade or crush them on the road to some free, smart, real, or just utopia will never arrive and instead will run into a strong reaction.

But a way forward that tries to make us Equal Americans, all with the same rights and opportunities – the only basis for shared citizenship and self-government – is a road that connects our past and our future.

Meanwhile, we remain trapped in two countries. Each one is split by two narratives—Smart and Just on one side, Free and Real on the other. Neither separation nor conquest is a tenable future. The tensions within each country will persist even as the cold civil war between them rages on.