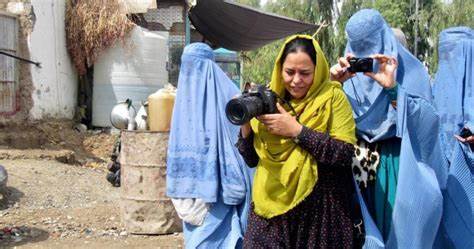 Hundreds of journalists working in Afghanistan have fled or gone into hiding in recent weeks following the seizure of power by the Taliban. The leader of one of the IFJ’s affiliates in Afghanistan, who has worked for over 20 years with international media as a reporter and senior editor tells us about the challenges he and his colleagues have faced since the militants took Kabul on August 14, 2021 in a country where censorship has become the norm and the risk of being detained, beaten or killed a daily reality.

IFJ: It’s been over a month since the Taliban took over Kabul which led many journalists to escape or to go into hiding. As a journalist and a unionist, what are the biggest challenges you’ve had to face?

As a journalist it is hard to work under the Taliban because they don’t respect journalists’ rights, they see every journalist as an enemy or as working against them. They have violated the existing legislation, they have not set out any clear policy, they don’t allow access to information and prevent news coverage each time they don’t wish an issue to be reported on.

I have worked mostly with international media, mainly from the UK and US and they want to punish journalists who have worked with US, UK and other western media. My life is at risk and every minute I fear they will try to find and arrest me or kill me.

As a unionist I feel my life is even more in danger because I was protecting national and international journalists and media workers’ rights and I was critical of the Taliban policy, fighting for press freedom and freedom of expression.

I have been at the frontline of protecting journalists’ rights, holding press conferences, issuing statements with critical words against the Taliban over the past 20 years. I have used every opportunity to lobby against them. It is clear they have all the records, archives of our speeches, statements and quotes. In their files, my role has been highlighted which has created even more problems. For these reasons, I have restricted myself, changed my location and kept a very low profile, but it will be difficult to continue in the long run.

IFJ: What kind of threats do journalists remaining in Afghanistan face on a daily basis?

There are two types of threats. Journalists who are heads of unions and protecting other journalists’ rights, members of media commissions and councils with former governmental bodies or those moderating important programmes face the risk of being abducted, arrested, tortured, ‘disappeared’ or killed.  Journalists covering daily news and incidents may face arrests, disappearance, intimidation, abduction, attacks or injuries.

IFJ: How do you personally cope with the situation in your everyday life?

I have lost all my ability and passion for journalism to cope with growing stress, fear of being abducted or killed. I am their target for my criticisms against them. My association’s affiliation, work and reporting to the international media and freedom of expression organisations is known to all.

IFJ: How can you describe the state of the media in Afghanistan right now?

Media in Afghanistan are in a critical situation. Media owners, managers and workers have seen their rights removed. Many media programmes have been stopped. TV and radio stations need to run all programmes with a religious angle. But these programmes do not appeal to citizens. The younger generation and children have nothing to watch or listen to in the media. Media have lost all their advertisement revenues and financial support. There is only a small number of advertisements in the media and without advertisement it is impossible to survive. More than 153 media outlets have collapsed in over 20 provinces. The results of 20 years of democratic process and international support are falling to pieces.

IFJ: What change have you noticed in news coverage from Afghanistan?

Changes are coming one after the other. We are losing press freedom. We are working under a religious dictatorship where we have to ask permission to report. We witnessed in the past few weeks journalists being arrested for covering demonstrations, public gatherings and public demands for freedom. If journalists do not respect the new rules and instructions they will be targeted or arrested, some will disappear. Coverage for international media is becoming harder and more difficult.

IFJ: Are there still any women journalists working in the media?

Most experienced and professional women journalists have left the country or remain at home and are not working. A small number still work for TV or radio channels as anchors. It is hard now for them to report from the field or shoot with cameras. A number of women journalists working in provincial radios lost their jobs because most radio stations were stopped and collapsed.

IFJ: Our affiliates AIJA and AIJU have been doing an extremely important job on the ground supporting journalists. What sort of help do you need right now from the IFJ community?

AIJA and ANJU have been on the forefront of protecting journalists in the past two decades. Their leadership needs protection until the situation becomes normal or at least some sort of legal framework becomes active and Taliban put in place specific mechanisms to protect media organizations and their leadership. AIAJ and ANJU’s Executive body and leadership are facing serious threats to continue their job. Some senior members of both organisations need IFJ and other organisations support in evacuation, visa issues, and safe transfer to other countries to remain in shelter for some time.

AIJA and ANJU members who are displaced need financial support and shelter. In general, both organisations need IFJ support to protect journalists’ rights in this critical situation, both in Afghanistan and outside the country.

IFJ: Local media groups left in Afghanistan met with Taliban leaders on September 3 to address concerns around journalist safety. What was the result of this meeting and how did it concretely translate into practice? Are you planning to run more of these meetings?

I have no hope that the Taliban are really interested in genuinely working with media organisations and to establish a clear mechanism to listen to our concerns and solve problems.  They are confronted with their own opposition issues right now. There is no unified and agreed policy including on media freedom and the way media should work. We keep links with the Taliban in order to keep the door open for times when journalists face life and death situations. Without the existence of laws and clear policies it will be hard for meetings and temporary committees to offer the rights and freedoms we want.

IFJ: Any other specific issue you would like to mention?

We have a clear financial issue. After NATO member countries left, all international funds and support ended. Journalists are facing serious financial problems, many are not getting paid, we have no access to our bank accounts and there is no cash available. Even if the media had access to their bank account, they would not be able to pay salaries because they have limited income and no sponsor programs or advertising revenues. Urgent international support is needed to help media survive.

The IFJ has established a special Afghanistan Solidarity Fund within the IFJ Safety Fund to channel further support and urge those who can donate. All funds raised will go directly to providing support to Afghan colleagues.