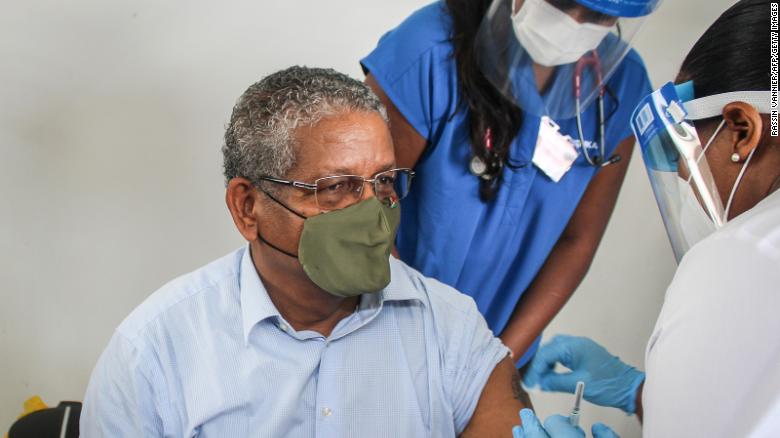 While other nations struggle to secure enough vaccines, the Seychelles is in the enviable position of having already fully immunised more than 61.4 per cent of the population. But that hasn’t been enough to stop the spread of Covid.

Over the past month, case numbers have been rising in the Indian Ocean archipelago, prompting authorities to impose restrictions in the country of 98,000 people. Data released last week showed there are more than 2,700 active cases.

Of the current active cases, 33 per cent have been fully vaccinated, according to the Ministry of Health.

On face value, the fact that the Seychelles, with such high vaccination coverage, is still facing an outbreak calls into question whether countries can inoculate themselves out of the pandemic.

Experts and local officials, however, say the Seychelles outbreak isn’t a sign the vaccines aren’t working. Either way, the tropical nation is a reminder that even countries with high levels of vaccination can’t drop their guard.

Just over a month ago, the Seychelles was so confident with its Covid-19 handling that it dropped restrictions for most tourists.

With few cases and a mass vaccination campaign underway, the tourist-dependent country reopened its borders to almost all international travellers, meaning anyone with a negative PCR test could enter the country without quarantining.

It was a crucial step for a country where tourism directly or indirectly generates about 72 per cent of GDP and employs more than 30 per cent of the population. By that point, the country had reported fewer than 3,800 cases and 16 deaths.

Since then, total cases have more than doubled to 9,184 cases and 32 deaths, according to Ministry of Health figures released at a press conference Thursday.

It’s not clear what led to the spread, although Sylvestre Radegonde, the minister for foreign affairs and tourism, said the virus had likely been in the country all along and had spread as vaccination made people more complacent. Improved contact tracing and testing had also helped authorities catch more cases.

“Over the last few months, after vaccination, people have seen that anybody getting infected is not getting seriously sick, nobody is dying, nobody is getting a lot of complications,” he said. People in the islands – who he said love to party – have been socialising without taking precautions. “People have let down their guard.”

“The conclusion is that the vaccines are protecting the people. Those who have been vaccinated are not developing any complications,” Radegonde said. “We remain confident that the vaccines – both of them – have helped the country. Things would have been worse.”

We reached out to the Seychelles Ministry of Health and the Health Care Agency for comment. To some, vaccinated people getting sick with Covid seems to suggest the vaccines aren’t working. But local authorities, experts and the World Health Organization (WHO) say the Seychelles’ experience is broadly in line with expectations.

“Until everyone is protected, there is no reason why the disease would not continue to spread,” he said in an email, adding that WHO teams are continuing to review the data, assess progress, and understand the trends in the country.

Michael Z. Lin, associate professor of neurobiology and bioengineering at Stanford University, said vaccine efficacy rates meant about 20 per cent of the population would still be susceptible to the virus, even if they were all vaccinated.

“It’s not a surprise if the virus is going to continue infecting some people, the unvaccinated and some breakthrough cases of the vaccine,” he said. But on the positive, people who had been vaccinated seemed to have a lower chance of being hospitalised with Covid than those who hadn’t been vaccinated, he said.

Of course, there are gaps in the data – crucial things that would give us a better idea of how the vaccines perform. It’s not clear, for instance, what proportion of positive cases took Covishield compared with Sinopharm.

It’s also unclear what variants are circulating or how widespread they might be. Seychelles News Agency reported last month that the variant first identified in South Africa is present in the Seychelles, but it has not yet reported the Indian variant. Radegonde said it was possible other variants were present, but limited genomic testing meant they hadn’t yet been detected.

If the variant first identified in South Africa is widespread, though, that could impact vaccine efficacy. AstraZeneca has been shown to provide only “minimal protection” against mild and moderate Covid-19 from the South African variant.