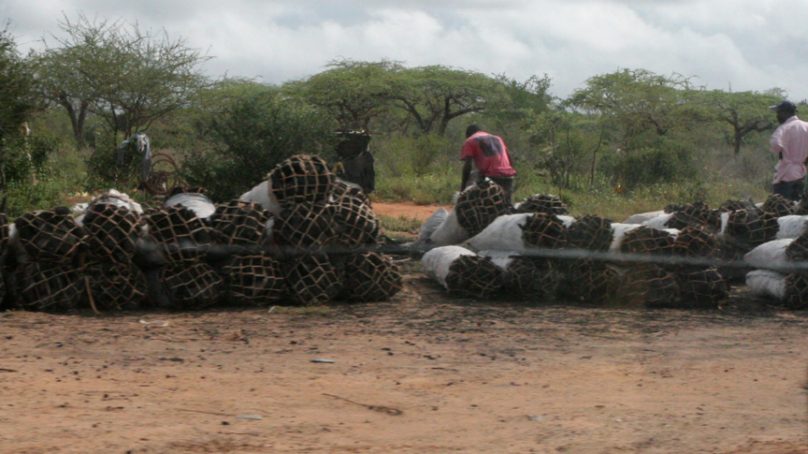 Despite a longstanding moratorium on charcoal production and trade in Kenya, current high demand for the fuel that has been enforced by expansive alternatives such as liquified gas and kerosene has given rise to a booming ‘grey market’ that now threatens to exacerbate ecological degradation.

Increased production and trade in charcoal has further exerted pressure on the environment that is already burdened with demand for more land for agriculture and lumbering, which feeds the construction industry in Kenya’s rapidly growing urban settlements, research findings by Global Initiative Against Transnational Organised Crime (GI-TOC) released this week show.

With nearly four-fifths of Kenya’s landmass designated as arid and semi-arid, the wanton harvesting of trees for charcoal and timber has further diminished forest cover in the country at a time the world is grappling with climatic change stoked by massive carbon-dioxide emissions.

According to GI-TOC, “High demand for charcoal means that a ‘grey market’ for charcoal continues to thrive in Kenya facilitated by criminality and corruption.”

The research findings titled Illicit Economies in Eastern and Southern Africa demonstrate how the flourishing charcoal market is perpetrated by “organised crime in the charcoal trade in Kenya, Uganda and South Sudan.”

The report, made public on Wednesday, says, “Charcoal is an essential energy source in East Africa. It is cheap, efficient and easily transportable. In rapidly urbanising areas, alternative energy sources are often simply not affordable or available. The charcoal market is also a key source of employment. In Kenya, the Ministry of Environment and Forestry estimated in 2016 that charcoal trade was the largest informal-sector employer, employing 700,000 people, who in turn are believed to be supporting between 2.3 million and 2.5 million dependants.”

As a consequence, the report adds, the demand for charcoal has led to widespread deforestation and damage to ecosystems and biodiversity that, in turn, threatens the environment that sustains rural populations.

“Regulation of the charcoal market demands a difficult balancing act: the quality of life of millions of urban residents and employment in poor communities on the one hand, and the need to preserve biodiversity and reduce carbon emissions on the other,” according to GI-TOC.

Other than western Kenya, central Rift Valley region, central Kenya around Mt Kenya and the coast, which collectively make up roughly a fifth of Kenya arable land, the rest of the country is ecologically fragile – varying from arid to semi-arid land. However, in agriculturally high-potential regions, rapid population growth exerts pressure on natural resources as swathes of forest land are cleared to produce food for the country’s population of 48 million people.

The GI-TOC report tallies with finding by University of Nairobi researcher Fridah Mugo Milumila, who traces increased consumption of charcoal as a fuel to the rapid urbanisation in Kenya.

Dr Wilumila observes, “In 1980, charcoal was estimated as providing eight per cent of Kenya`s overall fuel needs. Out of this, 50 per cent was used by urban households, 37 per cent by rural households, 12 per cent by the industry and one per cent by the commercial sector. Urban households are therefore the largest consumers of charcoal. Increasing national population and urbanization translates into a greater demand for charcoal.”

It is estimated that of charcoal in Kenya has been growing by 4.7 per cent between the 1990 and 2018 despite enactment of a raft of regulations to curb environmental degradation. In the counties studied by GI-TOC, the report found that “governments have turned to blunt instruments in order to achieve this fine balance.”

The investigators point out, “In Kenya, this came in the form of the nationwide moratorium on charcoal production and trade in domestically produced charcoal – although the commodity can still be legally imported – first introduced in 2018 and still in effect today.”

Despite the national moratorium on charcoal production, the charcoal market in Nairobi continues to turn in a significant annual profit worth millions of dollars.

“Most of Kenya’s population do not have access to clean cooking fuels and instead rely on fuels such as charcoal for their daily needs. Rapid urbanisation across East Africa is contributing to rising demand for energy. The incentive to produce charcoal – by illicit as well as legal means – is therefore set to increase in the future,” GI-TOC found.

The aim of the moratorium was to conserve the country’s forests. However, the investigating agency has found that it has had unintended consequences. According to charcoal producers, the moratorium damaged the livelihoods of those in producing areas. Interviewed, some charcoal traders likened the moratorium to a death sentence.

“The ban came like death. There was no forewarning,” Tsingwa Nduria, who chairs a 2,000-member charcoal producers association in Msambweni, on Kenya’s southeast coast, told the GI-TOC team.

Despite the disruption, the trade has continued as a lucrative grey market, where corruption and criminality now exist along the value chain. Other studies on the effects of trade bans on other commodities where demand is not elastic have made similar findings, the researchers say.

They warn that banning charcoal does not translate to diminished demand in itself as those in the market continue to operate illegally if the potential benefits outweigh perceived risks of legal sanctions.

At the production level, the very act of harvesting wood for charcoal is illegal, but production has nevertheless persisted. In some regions of Kenya, such as Kitui to the east and Kajiado south of the capital Nairobi, local communities are sometimes intimidated into producing charcoal for dealers who control the regions’ market.

“In Kajiado, for instance, a cartel involving local chiefs, Kenya Forestry Service officers, the police and some politicians has reportedly targeted private and communal land that is home to indigenous tree species for charcoal production,” GI-TOC reports.

Transportation of charcoal involves evasion of law enforcement or negotiating a series of bribes along the route.

“Due to the higher risk of transporting charcoal under the ban, transporters or dealers who control transport, push up prices to account for money paid as bribes or potential losses due to confiscation and arrests. A charcoal dealer in Nairobi said that the increased risk of having trucks seized by the police, or of arrest, has forced transporters who are not ‘protected’ by dealers out of business,” according to the report.

Charcoal traffickers bribe of roughly Ksh3,000 ($27.70) at police roadblock, which traders is a “a standard bribe that has remained consistent for some time.” The amount soars to between Ksh5,000 (46.13) and Ksh10,000 ($92.25) as the contraband charcoal nears Nairobi. In addition to the bribes paid to police the traffickers also make payments to owners of land they pass through when moving charcoal from the forest to the main highway.

Sometimes, the report says, powerful charcoal dealers and the police service collude and withdraw the law enforcers from major transport routes to allow unimpeded flow of charcoal from point to point. This is true of the main charcoal routes from Kajiado, Ilbisil, Busia and Kitui.

The investigators found that “since the moratorium, charcoal has come to provide a major source of income for corrupt police officers, who actively seek out opportunities to ‘tax’ the illicit trade.”

Despite the intentions of the charcoal moratorium, ever-increasing demand for cheap energy in urban settlements and the ability of dealers and transporters to consistently evade and collude with law enforcers means that the charcoal market is still a lucrative proposition in Kenya.