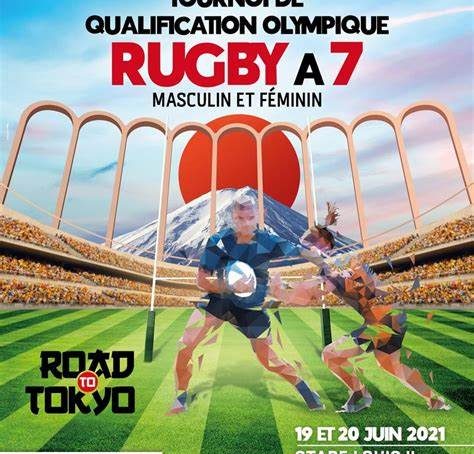 France, Hong Kong, Ireland and Samoa remain in contention in the men’s repechage while Argentina, Hong Kong, France, Kazakhstan and Russia are undefeated in the women’s tournament.

France set the pace in both the men’s and women’s Olympic Repechage tournament on a pulsating second day of action at Stade Louis II in Monaco.

Both squads won all of their matches on day two to book their place in today’s play-offs and maintain their hope of qualifying for Tokyo 2020.

Hong Kong, Ireland and Samoa will join France in the men’s play-offs, while Argentina, Hong Kong, Kazakhstan and Russia also have 100 per cent records in the women’s pool stage.

France’s men began their Pool B campaign in impressive fashion as they beat Jamaica 40-0 on Saturday morning.

The Crocs managed to restrict their opponents to two first-half tries, scored by Remi Siega and Antoine Zeghdar, but France cut loose in the second period and added further scores through Jean-Pascal Barraque, Jonathan Laugel, Sacha Valleau and Terry Bouhraoua.

Siega (twice), Zeghdar, Barraque and Laugel were on the scoresheet again when France faced Chile later on day two, while Pierre Mignot added a brace to help put the gloss on a 43-7 victory.

France will play Hong Kong on Sunday, with the winner topping Pool B. Salom Yui Kam Shing scored two tries as the Asian team opened their repechage campaign with a 31-5 defeat of Jamaica.

Hong Kong then trailed Chile by eight points with a little more than two minutes of their second match remaining. But late tries from Shing, Russell Webb and Alex McQueen secured a 26-15 victory.

Chile and Jamaica played the final men’s match on day two, and the South Americans ran in five tries to emerge victorious 31-5.

In Pool A, Ireland suffered a setback during their opening match against Zimbabwe as they lost captain Billy Dardis to injury. But, a Terry Kennedy hat-trick ensured they started the repechage with a 31-10 win.

Kennedy added two more tries as Mexico were beaten 31-0 and another three as Tonga went down 43-0. Jordan Conroy also notched a hat-trick against the Pacific Islanders.

Samoa tops the pool overnight, though, and should provide a stern test for the Irish on Sunday. A youthful Manu Samoa Sevens squad opened with a 69-5 win against Mexico, secured regional bragging rights as they ran in seven tries to beat Tonga 47-5 and rounded their day off with a 33-7 defeat of Zimbabwe.

Tonga ended day two on a high, meanwhile, as Malakai Fekitoa’s first try for the country of his birth helped them to a 21-12 win against Mexico.

Russia had an enjoyable day in the Monaco sunshine, winning their two Pool A matches at Stade Louis II by an aggregate score of 87-0.

Samoa were the Russians’ first opponents and Baizat Khamidova scored three tries as the Pacific Islanders were beaten 32-0. Elena Zdrokova then grabbed a hat-trick of her own as Mexico were defeated 55-0.

Argentina stands between Russia and a perfect pool campaign, and the South Americans also won both of their matches on day two, beating Mexico 36-0 and Samoa 15-12.

Tunisia led the way in Pool B at the end of day two, thanks to their impressive 46-5 defeat of Papua New Guinea, in which the African side ran in eight tries.

Kazakhstan beat Tunisia later in the day, however, as Vlada Odnoletok crossed the whitewash twice in the second half to secure a 12-0 win for Anna Yakovleva’s side.

Jamaica’s withdrawal meant that Kazakhstan had to wait until 17:00 local time for their first match, but the Asia nation will top the pool if they beat Papua New Guinea on Sunday morning.

France brought an end to the day’s action and Séraphine Okembe treated fans to a four-try performance in her side’s 47-0 victory against Colombia, which ensured Les Bleues top Pool C overnight.

David Courteix’s side, who narrowly missed out on automatic Olympic qualification via the HSBC World Rugby Sevens Series, started their repechage campaign in fine style against Madagascar. Lina Guerin scored three of France’s seven tries as they beat the African side 49-0.

France will play Hong Kong on Sunday and Iain Monaghan’s side also boast a 100 per cent record going into the match.

Hong Kong began their Pool C campaign with a 31-10 win over Colombia, which featured a Chong Ka Yan hat-trick, but they found things tougher against Madagascar, recovering from 12-0 down to win 19-12.