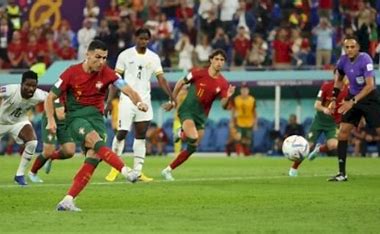 Cristiano Ronaldo is to become the highest-paid sportsperson of all time after reportedly agreeing a transfer to Saudi Arabian side Al-Nassr.

The superstar is a free agent after leaving Manchester United last week. But he is now agreed a two-and-a-half year deal worth £173 million ($208 million)-a-year with Al-Nassr, according to Marca.

Ronaldo revealed he turned down an incredible £3 million ($3.6 million)-a-week offer to play in Saudi Arabia in the summer, with Al-Hilal believed to have been interested.

Rivals Al-Nassr are now closing in on his transfer, having also fought off reported interest from Newcastle. Inter Miami were also believed to be interested in Ronaldo with owner David Beckham reportedly holding talks with the 37-year-old.

Rudi Garcia’s side are second in the Saudi Pro League, three points behind Al-Shabab. The league is on a World Cup break with Al-Nassr’s next game on December 16 – two days before the final.

Ronaldo is aiming to feature in the World Cup final with Portugal and could join up with Al-Nassr in January if he puts pen to paper. The former United star agreed to terminate his contract with the Red Devils after slamming the club in a tell-all interview with Piers Morgan.

Ronaldo criticised the lack of progress at the club since Sir Alex Ferguson left and revealed he does not respect Erik ten Hag. He also claimed the Glazers do not care about United and are more interested making money out of marketing the club.