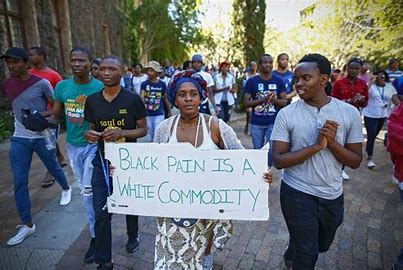 As marchers in the United States and around the world filled the streets this past week to protest against police brutality and racial injustice, Black scientists grieved openly on social media, calling for action on racism in society and in science.

Many stated ways in which institutions and colleagues, from collaborators to meeting organisers, could support Black scientists. Some pushed universities and scientific societies to release statements against racism. And several tweeted that the weight of the current events made it even harder for them to do their jobs in a profession that already marginalises women and people of colour – and Black scientists in particular.

“I’m not there yet,” wrote Desmond Upton Patton, a professor of social work at Columbia University, in New York City. “I’m struggling with kindness, forgiveness, empathy. I feel pushed to make decisions, go to meetings and to ‘show up.’ I’m just not ready.”

George Floyd’s death after being restrained and knelt on by police in Minneapolis, Minnesota, on May 25 last year, coupled with the killing of Ahmaud Arbery, Breonna Taylor and other Black Americans sparked largely peaceful demonstrations across the country.

The police response to some gatherings, which has included the use of chemical irritants and projectiles, made headlines and drew condemnation from civil-rights groups.

Scientists are organising as well. Hundreds had planned to stop their research on June 10, as part of an academic strike in support of the larger movement. The goal is “to hit pause, to give Black academics a break and to give others an opportunity to reflect on their own complicity in anti-Black racism in academia and their local and global communities” according to a description from one of the groups organising this event.

Time-sensitive research on Covid-19 can continue, the organisers wrote. With the hashtag #BlackintheIvory, hundreds described ways in which they had personally faced prejudice in science because of their identity.

Many are exhausted by the stream of gut-wrenching news. Cassandra Extavour, an evolutionary and developmental biologist at Harvard University in Cambridge, Massachusetts, said that reports of police brutality and killings alongside the systemic racism in her field tests her will to stay in science.

“Every time one of us is rejected, beaten down, dismissed, ridiculed or murdered, I question why I am still in academia,” she wrote in a series of tweets. “I answer my question by asking myself if today will be the day that another black scientist leaves the field, is pushed out by the toxicity that we have to wade through every day so we can ‘be productive’ and ‘just think about science.’ I answer, ‘Not today.’”

Eric Wade, a fisheries social scientist at Oregon State University in Corvallis, wrote, “Your BIPOC [Black, Indigenous and people of colour] students, faculty, and staff are juggling a lot and many of us have to fight an uphill to feel like we belong in this space.” He added: “The current social climate makes this harder.”

Over the past week, scores of universities and scientific societies joined organizations of every stripe in issuing statements about the civil unrest in the United States. Some faced criticism that they had missed the mark. For example, several chemists pointed out that the American Chemical Society (ACS), in Washington DC left out key words, such as “Black”, “police brutality” and “racism” in a statement released on June 1 and took issue with the way that the statement criticised the use of violence during the protests themselves.

In doing so, they argued, the society missed the core drivers of the current movement and failed to acknowledge the pain its Black members were experiencing. According to some analyses, Black Americans are killed by police at more than twice the rate of white Americans.

Glenn Ruskin, vice-president for external affairs and communications at the ACS, says that the society followed that “initial response” with a video message from ACS president Luis Echegoyen.

“In this message we condemn racism, stand in solidarity with our Black and Brown members and commit ourselves to using our resources to addressing issues of racism in all its manifestations,” Ruskin says.

Many scientists challenged organisations to back up their statements with actions that support or elevate Black scientists, including sharing their figures on diversity and ensuring that they hire staff members from diverse backgrounds. Some spelt out steps that institutions could take to fix systemic racism in science.

“Although it’s great that universities have made public statements condemning racism, it is important for those statements to include a specific list of anti-racist actions they’re planning to take to support their Black students, faculty and staff, such as increasing recruitment and retention efforts, supporting African American Studies programmes and anti-racism education and providing more funding to support Black faculty and students,” says Jioni Lewis, a psychologist who studies discrimination and mental health at the University of Tennessee, Knoxville.

Jasmine Abrams, a behavioural scientist at Boston University School of Public Health in Massachusetts, and Yale School of Public Health in New Haven, Connecticut, says that universities should investigate how their faculty members, students and staff experience racism, and draw up action plans in consultation with people who have been marginalized.

“Then they need to invest the time, money, and energy required to effectively and efficiently dismantle and penalize racist structures and practices,” she says.

Lesley Weaver, a cell biologist who is about to take up a post at Indiana University in Bloomington, suggested that scientific institutions and societies should ensure that they include people from minority ethnic groups as editors, reviewers and authors of peer reviewed papers; that they give students, staff and faculty members regular diversity and inclusion training; and that they make diversity sessions at major conferences main events rather than side acts that must compete for attention with concurrent sessions.

Addressing her own field of cell biology directly, she suggested stopping the use of HeLa cells, the extraordinary cell line that doctors at Johns Hopkins Hospital in Baltimore, Maryland, took and cultured without permission from Henrietta Lacks, a poor Black woman, in 1951.

Abrams similarly listed ways scientists could be allies to Black colleagues: “Drop our names for special opportunities or hires. Post about our work on your social media. Cite us in your papers. Vote in favour of our contract renewals, tenure and promotion.”

Reinforcing the case that such support in public spaces makes a difference, she wrote, “Say something (instead of secretly coming by our office later) in the faculty meeting, hallway, or classroom when a colleague or student says/does something implicitly or explicitly racist.”

The challenges that Black scientists face – and that white colleagues are now seeing – aren’t new, she added. “

Keep in mind that the plantation has been on fire for us and that for most, it is a legit daily struggle to do our work. We appreciate you reaching out, but we’d appreciate it more if you helped us put the fire out.”

Amid the maelstrom, Bianca Jones Marlin, a neuroscientist at Columbia University, posted a video message addressed to other Black scientists – speaking out loud something she wished she’d heard at difficult times in her past, “that your presence in science is important, that your purpose in science is seen”, she said. “I’m here to hear your stories. Because I get it.”