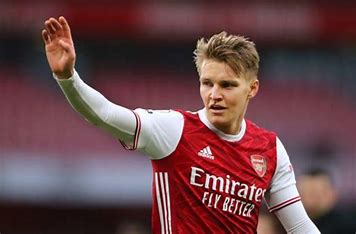 Arsenal and Manchester United are set to go head-to-head in a vital Premier League clash in the title race this Sunday.

The Gunners are currently leading the way with the Red Devils becoming dark horses since the return from the 2022 World Cup break with an impressive run of form. The two form teams now look set to battle it out in their biggest match in around 15 years and one of the key battles could be in midfield between the two captains Martin Odegaard and Bruno Fernandes.

After night fell last Saturday, and the hours ticked down to a crucial north London derby, Martin Odegaard started to feel unwell. It wasn’t nerves. In the end, it wasn’t much help to Tottenham, either.

The Arsenal captain hauled himself out of bed to score the decisive second goal and then dragged his team out of harm’s way as limbs began to fly from the stands.

Then, despite his long night, Odegaard found time for a chat with someone he had met recently. They also happened to work for Tottenham. The staff member was blown away; Odegaard was puzzled. How could manners mean so much?

Perhaps that paints a depressing picture of what we expect from footballers these days. Or perhaps derby day was the finest illustration yet of why Odegaard has become Arsenal’s beating heart.

That long-range drive took his tally of goals and assists to 13 – already more than last season’s. With Mikel Arteta’s side five points clear at the top ahead of hosting Manchester United tomorrow, is there a finer creative midfielder in the country right now?

Behind closed doors, meanwhile, his blend of ruthless professionalism and quiet diplomacy has helped unite a young squad.

He will never be someone who drives others through noise or personality alone. One fan site suggested Odegaard’s appointment symbolised a lack of leadership in north London. How would he break the curse of Arsenal’s armband, the circus that has followed captains from William Gallas to Pierre-Emerick Aubameyang?

Well, 18 games later, Arsenal have more points at this stage than the Invincibles. And Odegaard is playing the best football of his career. Rather than being burdened by responsibility, he has scaled even greater heights. To those who know him, the dots are easy to join.

Too often after leaving Norway for Madrid, aged just 16, Odegaard found himself in purgatory – out on loan or in no man’s land between Real’s first and B teams.

“You get to a point where the easiest thing you can do is be a little bit on your own,” a source says.

Now, at last, Odegaard has found his place. A home. And the total confidence of his manager. “That’s what he has needed all this time” someone close to Odegaard adds. Turns out he might be what this club needed, too.

At 24, Odegaard has already seen so many sides of football. He is mature and emotionally intelligent beyond his years. So much so that the midfielder has become a valuable source of advice and support for players such as Bukayo Saka.

“Martin is not someone to scream and shout but if he thinks someone is not OK, he’ll put an arm around them. And if he thinks something is out of line, he’ll be the first one to back up his team-mates,” a source says. “He has that edge when he needs it.”

This is leadership by example. Back in Norway, they remember the relentless work ethic of a child prodigy. These days, he is often the last to leave the training ground after extra hours in the gym. Or more meetings. The midfielder sometimes eats lunch with staff members to understand more about their role and the club.

Last week, Odegaard turned up to the launch of Arsenal’s new stadium artwork. It was a few days before the derby and the message was clear: no pressure. But he jumped at a chance to meet club legends and hear tales from down the years. People remember that stuff. Listening matters.

For Arteta, however, a leader needs one quality above all others: “When you talk, they listen.” He explained: “You have to be able to transmit your thoughts and ideas in a powerful way so you’re able to inspire people.”

Odegaard has earned respect of players and staff. Not by shouting or talking all the time. But knowing when to speak and when to delegate. Nothing overly glamorous. But crucial to strengthening bonds. “A real shift” has begun, according to one source. “That’s largely because of Martin.”

Watching Manchester United this season, it is easy to forget that Harry Maguire is still officially the captain. First, because Maguire has spent too long on the bench to be able to lead the team on the pitch. Second, because wearing the armband comes so naturally to Bruno Fernandes that it is hard to imagine the colourful Portugal playmaker without it.

Fernandes is the kind of player it is impossible to ignore, although your opinion of him will no doubt depend on which club you support. To United fans who love their Portuguese magnifico, he is a leader, talisman and inspiration. Rival supporters might not be quite so generous.

He can even rub his own team-mates up the wrong way, as Antony discovered in Wednesday’s draw at Crystal Palace. The pair exchanged words and plenty of gesticulations after the Brazilian misplaced a pass in the first half.

Fernandes made a point of shaking Antony’s hand afterwards, however, and was the first to welcome him into the huddle as he celebrated firing United in front before half-time.

A steadfast refusal to accept second best from himself or his team-mates is one of the reasons why Erik ten Hag has turned to Fernandes as his skipper in Maguire’s absence. The United manager has made it a priority to sign characters since taking over last summer, and that was a key factor in the recruitment of Casemiro and Lisandro Martinez.

But characters do not come much bigger than Fernandes, and it is testament to him that he has remained the heartbeat of this United team even during a difficult 18-month spell when the arrival of his compatriot Cristiano Ronaldo seemed to put him in the shade.

His leadership skills will be more valuable than ever at the Emirates tomorrow when Casemiro misses the clash with Arsenal through suspension as a result of the yellow card he picked up at Selhurst Park –  ironically as a result of a missed tackle by his captain.

It will be interesting to see if Ten Hag plays two defensive midfielders again, pushing Christian Eriksen higher up the pitch and moving Fernandes out to the right, as he did in the Manchester derby last weekend.

When Fernandes reverted to his preferred No 10 role for the final 20 minutes, it was a trigger for United’s comeback and his hugely controversial equaliser. He was on target again at Palace in midweek, making it 55 goals and 44 assists in 153 games for United since arriving from Sporting Lisbon in a deal worth up to £67.8 million three years ago.

Fernandes was everywhere at Selhurst Park. Pulling the strings for his team, demanding more from his team-mates, getting under his opponents’ skin and chivvying away at the referee. It is something the 28-year-old has always done regardless of wearing the captain’s armband, even though he knows it will not win him any popularity contests.

If United ever built a statue of Fernandes, it would probably be one of him throwing his arms in the air. “It’s the way I am,” he says. “I’m a person who is vocal on the pitch. Sometimes you can go over the line, but I think everyone in the dressing room knows this is the way I am, the way I try to push everyone and try to push also myself.

“That hasn’t changed since I arrived. From the first day on, I was the way I am now. I have always been vocal and I put my arms up, all that kind of stuff. If I feel at any moment I need to push someone and call them for a reason, then I will do it.”

Anyone who has worked with Fernandes throughout his career quickly identified him as a leader, even though former manager Ole Gunnar Solskjaer’s decision to make him captain on a Zoom press conference call before a Champions League tie against Paris Saint-Germain in 2020 caught the player by surprise.

Whatever the result tomorrow, you can bet he will not be far from the action. Arsenal know what to expect.